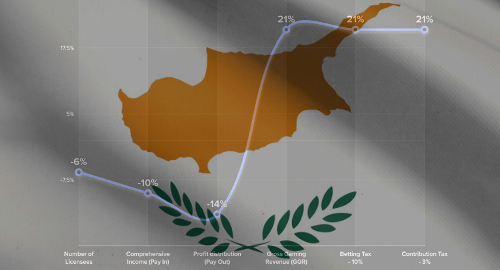 Republic of Cyprus-licensed bookmakers reported decent revenue gains in the first quarter of 2020, while the unauthorized PokerStars has apparently decided to get out of Dodge while the getting’s good.

Figures released last week by the National Betting Authority (NBA) show the state’s six ‘Class A’ retail bookmakers handled wagers worth €64.8m in the three months ending March 31, around one-fifth below their handle in the same quarter last year. However, the books played lucky, pushing retail betting revenue up 6% year-on-year to €15.36m.

The quarter’s combined betting handle of €165.5m pales in comparison to Q4 2019’s €215.5m, while Q1’s combined revenue of €25.3m is only slightly off Q4’s €27m. The turnover slump likely reflects the mass suspension of sports events starting in mid-March due to the COVID-19 pandemic.

Speaking of unwanted pathogens, the quarter saw the NBA add another 461 names to its blacklist of internationally licensed online gambling operators who continue to serve Cypriot punters without the NBA’s permission, bringing the total number of tarnished domains to 11,824.

Speaking of unauthorized sites, Cypriot poker players recently received emails from online poker giant PokerStars informing them that the site had “decided to suspend access to the platform in the region.” Players, who reported being refused entry to cash games and tournaments on Stars in recent weeks, have been given until May 4, 2021 to withdraw the funds in their accounts.

Stars has said little about its decision to bid Cyprus buh-bye, but the news came just weeks after its parent company The Stars Group was formally absorbed into UK-listed giant Flutter Entertainment. Flutter may be taking a less tolerant stance regarding so-called ‘grey’ markets, as evidenced by its Betfair brand cutting off its Russian customers earlier this month.

PokerStars may also have sought to avoid controversy in Greece, where its Diamond Link partner holds one of the ‘transitional’ licenses that are now being transitioned to permanent permits. A number of Greek poker players were known to set their VPNs to make it seem like they were based in Cyprus in order to evade paying onerous Greek taxes on their online winnings.

Speaking of dodging taxes, the NBA issued a response to the report issued earlier this month by the Audit Office of the Republic of Cyprus, which found that some NBA licensees were avoiding paying any tax on their betting revenue by failing to register with the local tax office. The auditors claimed that the state was out “millions of Euros” as a result.

The NBA claimed that “to the best of our knowledge, our operators are fully compliant” with local tax laws. The NBA added that the auditors were focused on “the issue of tax returns (not betting tax),” noting that “this matter does not fall within the competences” of the NBA.

The NBA also addressed the auditor’s findings that the NBA hadn’t been particularly vigorous in ensuring betting license applicants furnished all the necessary documentation. The NBA said “in principle,” it doesn’t issue or renew licenses without proper documentation, but admitted that there were cases in which the NBA bent the rules so long as the applicant submitted the requested documents “within a specified time frame.”

The NBA also attempted to deflect most of the auditors’ other claims, although it extended an olive branch (of sorts) by claiming that “our goal was and remains the continuous improvement of the procedures and the performance of the [NBA], and in this aspect the Audit Office’s report will be duly noted.”