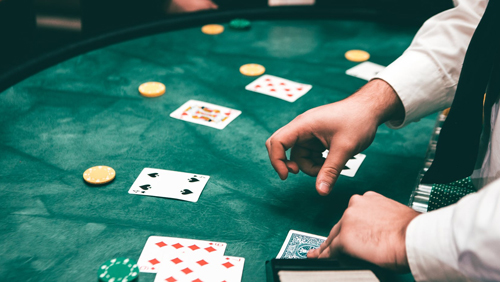 The Main Event of 1978 looked very different to the WSOP Main Event of today. In fact, you can barely see it at all through the clouds of smoke in the room. How anyone got a bluff through when surrounded by players so close they could run their hands through the players hair if they chose to is anyone’s guess.

The World Series of Poker has changed immeasurably from the 1970’s in so many ways. Players now qualify for WSOP events from home by playing online satellites for as little as a single dollar. The series is at the Rio All-Suite Hotel & Casino, rather than Binion’s Horseshoe. But many of the changes we’ve seen have affected the televised end-result.

Take a look at the 2003 Main Event, where even before the much-heralded finale where Chris Moneymaker won the title and became World Champion for $2.5 million when he beat Sammy Farha heads-up, it was all go. With a rail now around the final table, the way Moneymaker’s bad beat of Phil Ivey was brought to life is a real bookmark in the televised history of poker.

From new innovations such as graphics and under-the-table cameras then RFID chips in the cards themselves so we can all know what the players hold before they make their moves, the World Series of Poker has always been entertaining but perhaps never more so than today.

With a presenting team that includes some of the biggest poker players themselves commentating or co-commentating on the action, as well as being back in the studio to react to each Main Event day of action, the WSOP is a mammoth television operation that usually kicks off in the planning stages as soon as the previous year has been completed.

Hossein Ensan beat Dario Sammartino in last year’s World Series of Poker Main Event heads-up, with the German taking home $10,000,000 for his efforts at a superbly run, glitzy final table with razor-sharp HD visuals, impressive graphics and a presenting team that could fill up one of the smaller WSOP event fields themselves.

The innovative changes that come into televised poker are bound to be felt most keenly by the World Series of Poker, with the two-month festival the biggest poker spectacle on Earth.

The World Series of Poker as a TV show has often been flawed but continues to thrive in this new world of GTO and User Interface-style graphics that make poker seem more like a video game than a card game.

While there are better TV shows, the World Series of the Poker is a poker TV show like no other. It is the cockroach of the animal kingdom in poker terms and will outlast all others. We wouldn’t have it any other way.