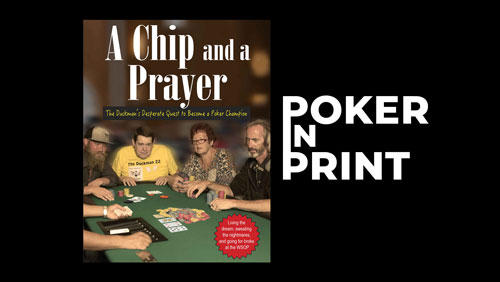 Given a testimonial by Phil Hellmuth himself, this is the story of how a player known as ‘The Duckman’ went for broke at the World Series of Poker.

You might ask ‘What makes this story any different to anyone else’s shot at glory as they bid for the World Series of Poker bracelet so many players desire more than any other poker tournament victory.

The answer, however, might not be what you expect. The reason A Chip and a Prayer world so well as a book about shooting for the moon exactly how everyone else wants to is the familiarly that ambition then shares with the reader.

Marvin Karlins wants to be a poker champion, and not just any champion, but a bracelet winner. His idea isn’t to run up a ticket to the big one, but moreover, commit a huge amount of money to shortcutting the dream to the exciting section of actually taking part. In that sense, it cuts to the quick and you’re never bored reading this tale. It does, however, make you root for the man known as ‘The Duckman’ a little less than if his story had more of a rags to riches feel. Instead, it’s more a riches-to-rags tale and you don’t watch Rocky to see a conceited champion beating up the plucky try-hard, do you?

Putting it all on the line is a good hook and it’s more out of worry that you keep reading – to see if he’s going to get a return on his money. We won’t spoil it by telling you what happens, but while Karlins writes with good humour and plenty of it at his own expense, because of the way he comes into the action, the edge is taken off.

If Karlins is unlucky in a hand – or loses too much due to misplay – we found ourselves thinking that had $50,000 to spare before he sat down rather than how unlucky he was to lose so many chips early.

In a sense, there is a great story here. Everyone loves someone putting it all on the line. But often we loves those stories because we are invested in the character at the heart of the drama. We already know and love the protagonist and therefore we feel every punch they have to come back from.

Instead, A Chip and a Prayer comes across a little like a fight The Duckman bought himself into. In the very events he’s playing, there would probably be better stories on every table about players who have crawled over metaphorical broken glass to get there. The Duckman flew in, landed on soft down and then has to paddle furiously beneath the surface.

While many parts of A Chip and a Prayer are highly entertaining, we found ourselves wondering which other stories might be told at the same tables at which The Duckman documents his play.

A Chip and a Prayer was released in 2018 and is available on ebook right here, right now. Pull up a prayer and hope for the best.