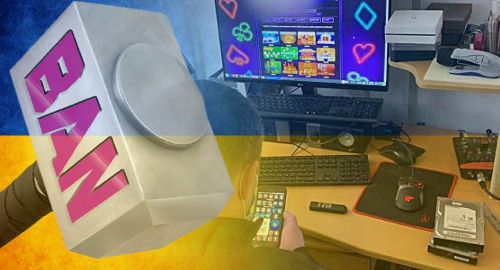 Ukraine’s government has blocked the domains of 59 internationally licensed online gambling operators, even as the country’s efforts to regulate its own online market remain bogged down.

On Tuesday, the Security Service of Ukraine (SSU) announced that material it provided had led to the courts ordering local internet service providers to block 59 unauthorized gambling domains. The SSU said it would continue to “take all necessary measures to bring to justice” individuals who flout the country’s online gambling laws.

The SSU declined to specify the identities of these 59 online rapscallions, but did say they included the “20 most popular platforms among Ukrainian gamblers.” In February, Ukraine’s telecom regulator ordered the blocking of 32 gambling domains, including familiar western faces such as PartyPoker and Pinnacle.

On Wednesday, the ever-busy Cyber Police of Ukraine announced the arrest of a 46-year-old man in Odessa accused of running three unauthorized online casinos that catered to over 20k users in Ukraine and Russia. The man also operated a payment processing network that generated ‘earnings’ of over UAH1m (US$37,500) per month. The police noted that the three sites have now been blocked, but it’s unclear if they are among the 59 cited above.

For years now, Ukraine has been trying to launch a regulated online market and a draft of the necessary legislation was approved at first reading in January. However, bickering over tax rates and minimum age requirements – as well as some 3,500 proposed amendments filed following that first reading – have slowed the legislation’s progress.

Finance committee members were scheduled to start wading through those amendments this month, and committee chair Danil Getmantsev told local media that the gambling legislation was “one of the most difficult bills, because there is a lot of lobbying, conflicts and scandals around it.”

Nevertheless, Getmantsev expressed optimism that the finished bill would eventually get done, although he could offer no more exact timeline than to say it would happen sometime this year.