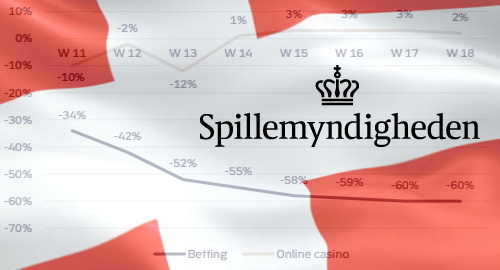 Denmark’s gamblers aren’t shifting their action online despite the mass closure of retail gambling options, while Spain’s government says its gamblers were gambling online more until it cracked down on operator marketing.

The results show a 60% decrease in betting activity, spurred by not only the retail lockdown but also the mass cancellation of major sports events. But while other markets have witnessed a surge in online casino activity during this period, Spillemyndigheden says online casino figures are up only 2% year-on-year, a much smaller growth rate than online casino enjoyed from 2018 to 2019.

The pandemic lockdown has also failed to produce “great variation” in the country’s ROFUS gambling self-exclusion registry. There were also fewer calls to the StopSpillet problem gambling help line during the period in question than the year before.

Spillemyndigheden chief Morten Niels Jakobsen cautioned that the numbers were preliminary but nonetheless stated that “it does not appear as if the decrease in gambling at land-based casinos and gaming machines as well as betting has caused an increase in gambling on online casino.”

That’s not the case in Spain, at least, according to Minister of Consumer Affairs Alberto Garzón, who gave a speech on Monday in which he claimed online casino, poker and bingo activity had soared during the first two weeks of the country’s COVID-19 lockdown.

Television viewing had also increased significantly over that span, which led Garzón to impose new restrictions on Spanish-licensed gaming operators’ advertising and marketing activity at the end of March. Garzón said Monday that these new limits had produced the desired decline in online gambling participation.

However, Garzón didn’t provide any hard figures to support his assertion of ‘enormous’ success in bringing online operators to bear. Garzón did say that the existing restrictions would be temporary, although he intends to press forward with plans to impose the permanent limits his ministry proposed in February.