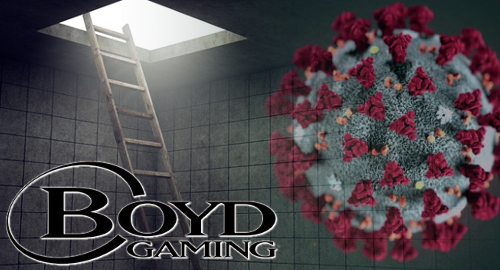 US regional casino operator Boyd Gaming lost $18.3m in the first quarter of 2020 as the pandemic-related shutdown of its gaming venues left the operator scrambling to keep the lights on.

Two months ago, Boyd was on top of the world, reporting gains across all its geographic segments and finishing 2019 with profits up more than one-third. By mid-March, the company had been forced to shut all 29 of its properties due to the COVID-19 outbreak and those properties remain shut to this day.

All three of Boyd’s geographic segments were broadly negative, led by the dominant Midwest & South casinos, where revenue fell nearly $100m to $445.6m and earnings (before rent expenses) dropped by more than $50m to $105.8m.

Boyd CEO Keith Smith said his company had continued its 2019 momentum through the first two months of 2020 but the pandemic made swift work of that. Smith said his company is “fully supportive” of state and local officials’ efforts to limit COVID-19 spread and intend to “emerge from these challenging times as a more efficient and operationally-focused company.”

Boyd took a number of steps to ensure it will be able to emerge from its current plight, including suspending its dividend program, furloughing staff, postponing all non-essential spending, trimming executive salaries and drawing down $637m from Boyd’s revolving credit facility.

BOYD TO HELP STIR CRAZY GAMBLERS ESCAPE
Speaking on the analyst call, Smith echoed the views of rival Las Vegas Sands, who have predicted that the current inability to access casinos will create ‘pent-up demand’ among customers. “People are at home. People are needing to get out. People are looking for an escape and … we will be part of that escape.”

When the casinos reopen, most operators expect local regulators to impose limits on everything, from the number of people allowed in a venue to ensuring adequate social distancing between customers. Smith predicted that “in some markets … we may have more demand that we have capacity in the building or that we are allowed to have in the building.”

Smith predicted that Boyd’s Las Vegas Locals business will come back strong based on the number of retirees who “didn’t have a job before [the casinos were shut], don’t have a job now, they still have their income,” and with Boyd’s expected reduced capacity “there will be good demand for the product.”

In some other markets, where Boyd’s properties have hotels with up to 1,900 hotel rooms, “I don’t suspect we will be opening all those hotel rooms initially, because I don’t think there will be quite that demand there.”

ONLINE GAMING “A PROFITABLE BUSINESS FOR US”
Boyd dipped its toes into the US regulated online gambling market through its FanDuel partner’s late-January launch of an online casino in Pennsylvania via Boyd’s Valley Forge casino. Smith said Tuesday that the casino app’s customer acquisitions were “up quite significantly” since the land-based casinos closed and revenue was up 60% higher.

Smith previously explained that Boyd would derive “a benefit if one of our existing customers goes online” to play with FanDuel. Boyd declined to offer any specifics on Tuesday but did say iGaming “is a profitable business for us.”

Smith also predicted that the ability to continue offering services online during the land-based shutdown would force states, particularly those that already offer sports betting, to “have serious conversations” about authorizing online casinos once the world returns to something resembling normal.