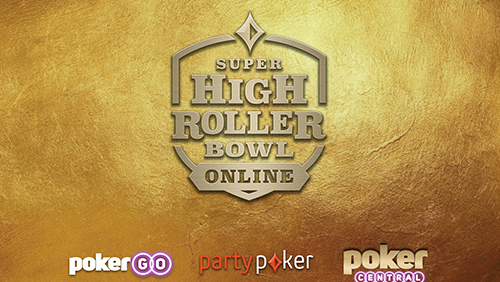 After the huge success of the 2020 Poker Masters Online Series, Poker Central have announced that the next Super High Roller Bowl will take place online between May 23rd and June 1st.

The recent Poker Masters featured 30 events, some of which cost either $25,000 or a massive $50,000 to play. Despite that reach, Poker Central more than made their numbers count, with a total prize-pool over the series of over $35 million dwarfing the initial $16.5 million projection in terms of guarantees.

Because of that, this year’s next Super High Roller Bowl will now take place online – at partypoker – with a guarantee of $20 million.

The Poker Masters series online saw the closest ever battle for the Purple Jacket play out, with the title and $50,000 leaderboard bonus up for grabs with just three players remaining. Alexandros Kolonias eventually managed to win the final event to cement a stirring victory.

It was no mean feat for Kolonias to take down the series, with some of the biggest names in the poker world taking part and 124 individual players cashing during the 30-event series.

“Hosting the Super High Roller Bowl on the same platform as PMO is enticing,” Kolonias told Poker Central after the event concluded. “It will give poker players another virtual opportunity to test their skills and possibly go all the way like I did!”

There are a healthy 28 High Roller events taking place as players pursue the fabled SHRB Championship Ring. Those events will feature buy-ins that range from $10,000 right up to $100,000 with every single event a two-day occasion, running up to final tables that – in 10 cases – will feature whip-smart commentary from Brent Hanks and Jeff Platt that we’ve come to expect these days, thought coverage presenters are unconfirmed at the time of going to press.

Interestingly, there is a slight wrinkle to the leaderboard points on offer, as whichever player collects the most points in the first 27 events will received a free entry into the $100,000-entry Super High Roller Bowl Online event which has a six-figure buy-in of $100,000 and a guarantee set at an eye-watering $3,000,000.

Whoever takes part in any event will also bank a year’s free subscription to PokerGO as part of their entry fees, guaranteeing themselves plenty to watch around the clock with their on-demand service.

J.R. McCabe, Chief Business Officer of Poker Central, made the following statement to announce the festival.

“After a successful Poker Masters Online tournament, we knew we had to continue the momentum with an online Super High Roller Bowl series in lieu of a live tournament this year,” he said. “Our partnership with partypoker will allow us to continue to deliver what our fans love – live poker from the best players in the world.”

Having travelled to Australia, Russia and the U.K. in recent times, the Super High Roller Bowl will again look to attract the top talent from the industry and provide plenty of entertainment for poker fans wherever they might be watching in the world.