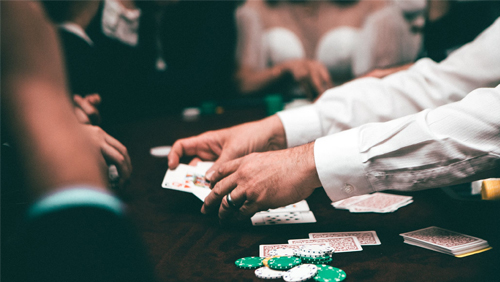 Poker often features in crime fiction, but usually as a sideshow. The home game that is interrupted by news of an unforeseen death, the walkthrough of a casino after police tape has already been tied up around a crime scene, or the internet history looked up after a serial killer has run amok.

Rarely, however, is the game of poker integral to the plot of a crime story.

That is, except perhaps, in the short story collection called Dead Man’s Hand, a 2008 compilation edited and compiled by Otto Penzler with an introduction from Howard ‘The Professor’ Lederer.

Don’t let that FTP-scandal-tasting stamp of approval put you off. The volume contains 15 stories from some of the world’s best crime writers, such as Alexander McCall Smith, Walter Mosley, Joyce Carol Oates, Jeffery Deaver and Peter Robinson.

The book’s success hangs, however, on a story that is written by Michael Connelly and features his longest-standing character, detective Harry Bosch. Bosch’s ex-wife, Eleanor Wish, lest we forget, is a professional poker player par excellence, so it is an area that Michael Connelly writes with some authority about. Perhaps because of that, it’s a convincing read and one of the highlights of the anthology.

Here are the 15 stories in full:

Alexander McCall Smith – In the Eyes of Children

Parnell Hall – Deal Me In

Rupert Holmes – The Monks of the Abbey Victoria

With stories such as Bosch’s investigation of a dead female poker pro called Tracy Blitz, a lady called Mrs Vancalm using the game as an alibi and a schoolteacher who could go all-in and is certainly at risk in a poker game on the high seas, there are some great plots amid the poker games.

It would be easy to see the game of poker itself become quite repetitive as by introducing readers to the game, explaining the rules or breaking down the mechanics too often, but everyone is on the same page in that respect. There’s no stalling around the action and the presumption that readers are already familiar with the game of poker is refreshing. Knowing pot odds isn’t necessary, but understanding the context is, and as long as you know poker to a basic degree, you’ll really enjoy what is a thrilling collection of stories.

You can buy a copy of Dead Man’s Hand (a nice reference to Wild Bill Hickock and the legendary hand of aces and eights that he was holding when he was shot) digitally right here, with no need to wait until the end of lockdown.

Poker may be a dangerous game in Dead Man’s Hand, but it’s a thrilling read. Grab it and read it while you grind online or when you’re next back at the live felt. You won’t be disappointed.