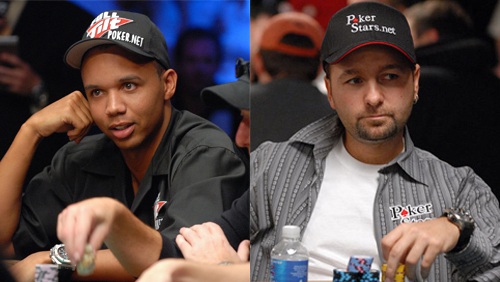 The best of enemies at the table, good friends away from the felt. For 20 years, Daniel Negreanu and Phil Ivey have battled in the game of poker. While others are huge poker celebrities, such as old master Doyle Brunson and modern-day hero Phil Galfond, Negreanu and Ivey are arguably the two biggest names in the game.

This weekend, Negreanu took to social media in response to a fan asking him if he thought Phil Ivey was the best poker player of all-time, as he had been voted in a recent Twitter poll.

Having won six World Series of Poker bracelets himself, Negreanu was quick to reply in the affirmative about Ivey who, with 10 WSOP bracelets is only second to bracelet-magnet Phil Hellmuth in the annual poker festival.

Phil Ivey is the greatest poker player I’ve ever played against.

There are some great no limit hold’em players out there but that’s just one variant of poker.

Ivey is great at all things poker. He isn’t a one trick pony.

Ivey and Negreanu have, of course, played together many times. They’ve shared the felt in plenty of big games, including this hand analysed by Negreanu many years after the 2015 heads-up battle for the ‘Shark Tank’ $966,000 top prize, and it led to the Canadian winning the trophy.

Negreanu has often referred to Ivey as ‘boss’ and it’s clear that there is a whole heap of respect between the pair. Negreanu’s bluff during this Aussie Millions hand is one of the best hands the pair have ever shared.

It was Ivey who got the better of his oldest adversary at this EPT Grand Final table, which also featured Steve O’Dwyer. Negreanu showed the queen as he made the fold on the river… but Ivey mucked without showing. What do you think he had?

Another Aussie Millions hand from way back when – Negreanu’s full head of dipped-blonde hair carbon dates this footage – shows what happens when two masters of the game clash. There’s a lot of thought that goes into this hand, and in the end, Ivey can’t resist paying Negreanu’s winning hand off.

Even when we don’t get to see too much action between the two, we get to hear about it. If you’re anything like us, then you’re a big fan of Negreanu’s Video Blog series which is mainly based in Las Vegas during the summer of WSOP action.

Even when they’re just meeting up at the $25,000 Short Deck WSOPE event, it’s big news, to the two men themselves as much as poker fans like ourselves.

Wherever they pitch up, Negreanu and Ivey are likely to keep running into each other. In the fullness of time, deciding which one sits nearer the top of the poker tree might be a pop quiz poser for some people, but to the two poker legends themselves, they’re likely to be just as happy sharing the throne as they are trying to conquer it for themselves.

Charles Evans Hughes, once the Chief Justice of the United States remarked ‘A man has to live with himself, and he should see to it that he always has good company’.

Both Phil Ivey and Daniel Negreanu can revel in the fact that they are likely to always have each other.