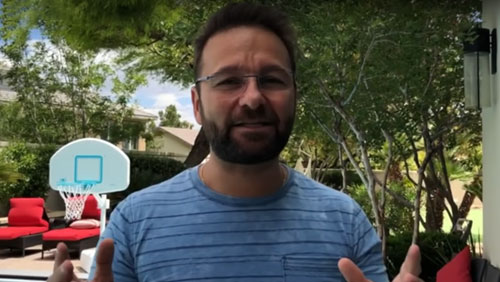 In the latest in our series all about the art of video blogs about the game of poker, we’re taking a look at one of the most popular and successful players the game has ever seen – Daniel Negreanu.

A six-time World Series of Poker bracelet winner, Negreanu has amassed over $42 million in live tournament winnings, and has largely done so without playing the Super High Roller events that the two men above him in that list – Justin Bonomo ($49m) and Bryn Kenney ($56m) – have done so very frequently.

You might ask why Negreanu has peppered the internet with videos of him and his Vegas lifestyle. After all, he’s not trying to get an audience, having one of the largest fanbases in poker. Quite simply, after watching hours of him in action in the entire collection of his vlogs, Negreanu clearly loves the game and it motivates to such a level that he wants to share his journey through his poker career and life.

That’s an important point. While some poker vlogs – such as Brad Owen or Andrew Neeme – largely focus on the poker action itself, a lot of what Negreanu is best at hovers around the action at the table. His videos during the World Series of Poker, especially the larger, Vegas-based section of the series, are thrilling not only due to the big events that he was playing at the time – results were available quicker than each episode came out – but down to the preparation Negreanu puts into each game.

Watching Negreanu in action during the series of video blogs he put out over the summer was a rollercoaster ride. He got married, made deep runs in several events and reached multiple final tables, then won and subsequently missed out on the WSOP Player of the Year title after a miscount in one event earlier in the series scuppered his hopes.

Negreanu takes it all in his stride and provides plenty of humour to go with the obvious insight that someone with well over 25 years of poker experience at the highest level can bring to the party.

Over the next few years, providing live poker returns soon, Daniel Negreanu is likely to remain one of the most watchable poker players on the planet. From his feud with Shaun Deeb to his controversial views on many of the headlines ripped from current news stories, the vegan democrat can be a polarizing personality at his most chilled. He’s also one of the most intelligent and sensitive players out there, too, however, so often wears his heart on his sleeve.

One of the best reasons to join the 400,000 subscribers who hang on ‘DNegs’ words might be to watch the global poker superstar in action for his new sponsor, GG Poker, who are ramping up their online events and will surely host major international events when live poker is back. Another reason, however, is surely to brush up on your own poker skills.

While Negreanu’s recent foray into putting together his own poker Masterclass has been hugely successful, you can access plenty of tips for free by heading to this list of Negreanu’s poker advice on a variety of poker strategies.

Overall, Negreanu’s video blogs are a must-subscribe if you’re a poker fan, and probably even if you’re not. The next time the world needs a new reality TV family to focus on, The Negreanus have got to be in the running!