Home / Poker / Poker in Print: Devilfish: The Life & Times of a Poker Legend 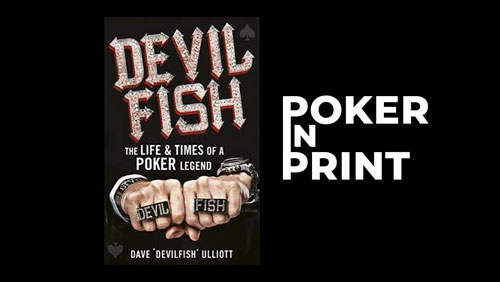 Some of the best poker books don’t offer you strategic advice, but instead inspire you to take up the game and improve at it. For lovers of a poker anecdote, as most of us are, Devilfish: The Life & Times of a Poker Legend is a book that has few equals.

To say that Dave Ulliott was a rogue and raconteur is not to disrespect him, but more to understate him. His poker stories had beguiling beginnings, mesmerizing middles… and no end. He could talk for hours and you’ll feel like it had been minutes.

Ulliott would frequently leap onto stage, grab a guitar and entertain people wherever he went. He’d join in with buskers, corral strangers in the street to hear him sing and woo the crowds at the World Series of Poker… before taking their money at the poker table. He was a born entertainer:

Thankfully for fans of poker biographies, he could write a good story too. The man who once served time in prisons in the North-East went straight and became a poker legend. The book is full of stories of how he turned his life around and had the ability to risk it all at the poker felt, something he did on many occasions. If he was up half a million or down to his last buy-in, he was just as dangerous, and thrilling company.

I interviewed Ulliott a couple of years before his passing as we shared some commentary airtime during the £2,000-entry 2012 English Poker Open, a tournament that should never have been allowed to drop off the calendar. Having a cousin who married a girl with the maiden name of Ulliott, I mentioned this to him on air. He looked and sounded genuinely fascinated, waited for me to tell him all about it. Then as soon as I was done asked me if this was the moment I was asking for a slice of his inheritance.

Ulliott could command the room to still and awe-struck quiet if it was in the middle of a bomb evacuation. He was the centre of attention wherever he went and he bathed in the limelight, giving it something worthwhile to light up. That luminosity is brought to life in the book brilliantly. It was given a glowing review by Ulliott’s old friend Victoria Coren-Mitchell back in 2010 when it was published:

“’I was nervous to review it, in case it was bad,” she wrote in The Guardian. “Dave Ulliot is a friend of mine and he has a gun. But I needn’t have worried. The book is, like the man, fast, funny, scary, smart, cocky, colourful, and I adore them both.’”

Dave ‘Devil Fish’ Ulliott passed away five years ago this week, a fact that is as shocking as it is tragically sad. Taken by cancer, Ulliott lived life to the absolute full and his legacy both at the poker table and in the many stories he shared during his life lives on with a burning energy that will never truly dim. The posthumously-awarded Poker Hall of Famer was a true legend of the game.

You can buy Devilfish: The Life & Times of a Poker Legend right here.