The oldest player to win the NFL MVP Award was Tom Brady in 2017 when he won it for the third time in his career. Of course, those all came as a member of the New England Patriots. Last week, Brady left New England in free agency for the Tampa Bay Buccaneers. They have never had an NFL MVP or really even come close – shoot, they have never had a true franchise quarterback until now. 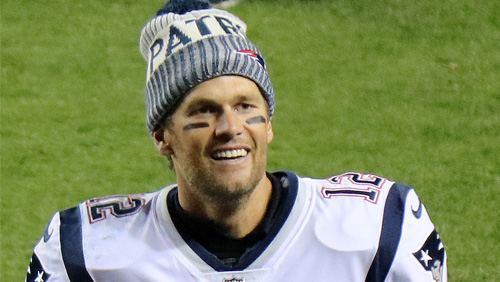 Could Brady in 2020 become only the second player to win the award four times, joining former rival Peyton Manning (5)? Considering Brady will be 43 when the season begins, that’s very, very unlikely but he’s only +1400 to do it. Brady will have arguably the best receiving duo he has ever had in Pro Bowlers Chris Godwin and Mike Evans, both of whom exceeded 1,000 yards receiving a year ago with a much more inaccurate quarterback in Jameis Winston.

Speaking of receivers, one has never won the NFL MVP Award, which is moderately surprising considering some of the historic seasons put up by the likes of Jerry Rice, Calvin Johnson and Julio Jones

While Brady was the biggest news in the NFL last week, the second-biggest was the Houston Texans shockingly trading superstar receiver DeAndre Hopkins, arguably the league’s best, to the Arizona Cardinals for past-his-prime running back David Johnson and two draft picks – neither of which was a first rounder.

Hopkins is not a betting option to win MVP, but the guy who gets the biggest boost with this trade is Cardinals quarterback and reigning NFL Offensive Rookie of the Year Kyler Murray. He is now among the MVP favorites at +1000. The Cardinals, even dating to their St. Louis days, have never had an MVP.

Drew Brees might own every regular-season NFL passing record by the time he retires, and Brees has opted to play again in 2020 for the New Orleans Saints instead of retiring. Still unfathomable that Brees has never won an MVP, and he’s +1500.

The two favorites are Kansas City Chiefs quarterback Patrick Mahomes (+500) and Baltimore Ravens quarterback Lamar Jackson (+600). Mahomes was the 2018 winner, and Jackson was the unanimous choice a year ago. Jackson, who actually is younger than 2019 Heisman Trophy winner Joe Burrow, became the second-youngest MVP in history behind Hall of Famer Jim Brown.