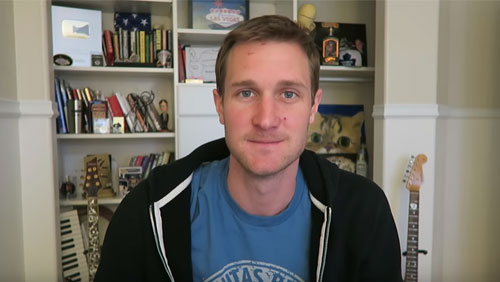 In this new series all about the most essential poker video bloggers you can subscribe to, we’ll bring you dozens of poker players and commentators to add to your online library. The best thing about our list is this: when we’ve finished, not only will you have a massive source of archive footage to enjoy at your leisure, but you’ll also be subscribed to some of the players who are at the coalface of poker and are sure to be producing poker content for many years to come.

Brad Owen’s appeal to the poker community is both wide-ranging yet incredibly loyal. Those are the two massive ticks for any content creator to have – a large fanbase who constantly come back for more. It’s the reason that Eminem continues to swear on his rap records, Daniel Negreanu still declares his intentions and Kim Kardashian doesn’t skip carbs. You’ve got to give the fans what they want.

Brad Owen’s entry into video blogging filled a real gap in the market for low-mid stakes players who could be likeable yet win bigger too. Owen is clearly a fantastic poker player, but he’s a humble guy too, and nicknamed ‘The Giraffe’ for his lengthy neck, it’s clear that he’s willing to put it on the chopping block in the pursuit of poker self-improvement too, as in the 135 videos on his YouTube channel, Owen is a humble guy. He’s always looking to get better at the game and has a winsome charm that’s evidently impossible to resist. With 195,000 subscribers, Brad Owen is a YouTube phenomenon, let alone a poker content legend.

Brad Owen’s specialism is cash game poker, so if you’re looking for tournament tips as a specific, you should look elsewhere. But that doesn’t mean that Owen’s analysis of poker hands can’t benefit your general play, which can be adapted to tournament tables too, and especially the early stages of a tournament as they so frequently play a little more similarly to cash games.

Owen may only have $14,409 to his name in tournament winnings, but two of those cashes came in World Series of Poker events. His cash game skills are great for low-mid stakes, and he’s in that happy niche of being able to pass on what he knows about the game in a witty and informative way.

Brad Owen’s video blogs are typically around 15-20 minutes long, but in exceptional circumstances run to 25 minutes and might sometimes be as short as 10 minutes long. If you play online cash game, then they’re going to be the perfect bitesize videos to plough through while you grind your own easy streets of poker learning.

With Brad Owen recognized by the industry in a big way, he was king enough recently to credit his friend and fellow video blogger Andrew Neeme after he won the 2019 Global Poker Award for Video Blogging.

It would’ve been great to win but I don’t think there’s anyone more deserving than the man that started it all. He’s cooler in real life than in the videos. Glad to be friends with and a co-host of the MUGs with @andrewneeme, your 2019 Vlogger of the Year. https://t.co/FfJUc2PNWT

Having carved out a role in the poker industry as a cash game player that makes fun, engaging videos that almost any poker player will enjoy in some way, Brad Owen has become a video blogging legend. He delved into his lifestyle and how he travelled the journey he’s been on when 888poker made this short video about the Brad Owen experience.

If you’re not already a subscriber to Brad Owen’s YouTube channel, then why not? If you are, then you’ll know just how much fun they are to watch.