Home / Poker / What do poker pros do when they’re not playing? Make rap songs 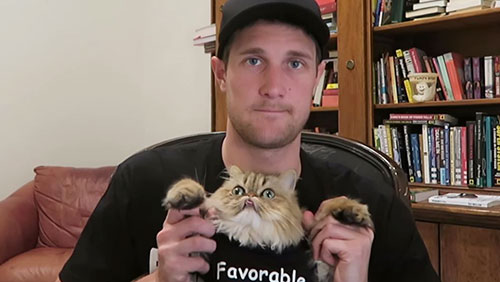 Brad Owen may not be the winningest poker player, but he’s made a name for himself vlogging about the game. He has over 35,000 subscribers to his channel, and is friends with someone of the game’s heaviest hitters, like Doug Polk and Phil Hellmuth. So what do they do when they’re not playing cards? They make rap songs. Not just any rap songs, though—cat rap songs.

The trio recently hooked up with fellow players Scott Blumstein and Andrew Neeme to create a rap song using Owen’s cat, Cosmo, as the main attraction. Apparently, Cosmo is a stellar poker player, and decided to let the world know that he “beasts everything.” This is the part where most viewers roll their eyes.

The rap is actually almost catchy. Owen uploaded the video to his YouTube channel three days ago and it already has 16,902 views, and Cosmo can be seen displaying his massive bank and ability to roll the chips. Cosmo compares himself to Garfield the cat and retired basketball star Michael Jordan. The rap video lasts a grueling 5 minutes and 39 seconds, but the rap itself, thankfully, is only 2 minutes and 32 seconds. That’s when the poker stars come in to discuss their histories with the furry player.

Neeme admits that Cosmo “flew through the stakes” in the few games they’ve played together. Polk, on the other hand, has had a number of duels with the feline, and has lost more hands than he cares to remember. Hellmuth was bluffed by the cat (not surprising) and Blumstein thinks that Cosmo should have won poker’s People’s Choice award. “He is a great poker player but he’s always bragging about how purrfect he is,” said Blumstein, who was also in the running for the award. Neeme ultimately took the People’s Choice Award.

For those that really think it’s necessary, the video can be viewed here. The question most people would be asking is, why? No one probably has the answer. Perhaps the poker stars were bored. Perhaps they were returning from a night out on the town. Perhaps, just maybe, Cosmo really is that good.