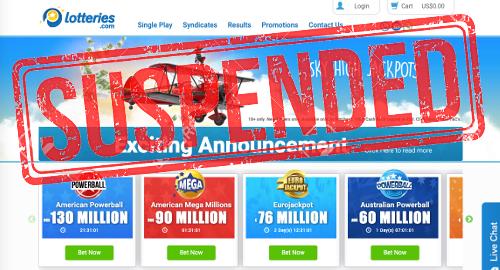 The UK’s gambling regulator has suspended the license of yet another online operator, the fourth such action in the last five weeks.

On Tuesday, the UK Gambling Commission (UKGC) announced the immediate suspension of the online betting and casino licenses of the Isle of Man-based International Multi-Media Entertainments Ltd, aka ‘The Lottery Centre,’ which trades via the Lotteries.com domain.

The UKGC’s statement said it decided to suspend the license “due to anti-money laundering practices and ongoing social responsibility concerns we have with the operator.” The UKGC has undertaken a license review “pursuant to section 118(2)” of the Gambling Act 2005.

The UKGC has instructed International Multi-Media Entertainments Ltd to ensure that UK customers are able to access their accounts to withdraw any funds and to provide “clear and updated messaging for consumers.” The company has yet to publicly comment on the suspension of its license.

However, Lotteries.com posted a notice last month of “a number of exciting developments” based on the company’s plans to roll out a new platform. As a result, the notice said the site had “made the decision to temporarily remove the option to deposit and to place any new or scheduled bets with effect from 5pm on 15th February 2020.” The site claimed “the transition is planned to take place over the next 4 weeks.”

The UKGC has been far busier than usual this year, having suspended the licenses of Stakers Ltd earlier this month due to “a number of compliance issues.” In February, the UKGC suspended the license of Addison Global Ltd and its MoPlay brand after concluding the operator lacked sufficient financial resources to ensure its status as a going concern.

Earlier in February, the UKGC ‘temporarily’ suspended the license of Triple Ltd, the parent of online betting exchange Matchbook for reasons that remain unclear. The site remains inaccessible to UK users, although the company says it has “agreed a path forward where it will deliver on a number of conditions” following discussions with the UKGC.

The UKGC has been under fire by parliamentarians and anti-gambling campaigners for being too cozy with the operators it oversees, with the All-Party Parliamentary Group on Gambling-Related Harm going as far as to declare the UKGC “unfit for purpose.”