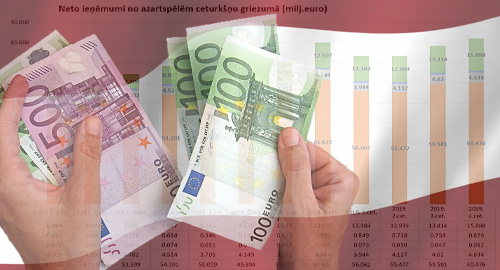 The online gambling sector enjoyed a significant surge in the final three months of 2019, far larger than any other vertical. Online revenue totaled just under €15.9m in Q4, 18.4% higher than Q3’s total and 27% higher than Q4 2018. The sum represents a new quarterly record for the market.

The IAUI continued its efforts to give its online licensees a fighting chance against their internationally licensed competitors, blocking an additional 68 unauthorized gambling domains last year, bringing the total number of domains blocked to 1,206 since August 2014.

Latvia’s online gambling revenue is likely to undergo further growth this year due to new payment processing restrictions that were announced last May and which took effect on January 1. The restrictions also apply to individual gamblers, who could face fines of €350 for patronizing unauthorized sites as well as penalties for not paying tax on any illicit winnings.

Latvia launched an gambling self-exclusion registry on January 1, and over 5,400 individuals have so far signed up for the program. Latvia’s Ministry of Health previously identified around 16k Latvians at risk of gambling addiction, so the registry’s take-up rate is pretty impressive.

Meanwhile, efforts to rein in land-based gambling show no signs of stopping. Last month, the northern city of Ventspils announced that it was banning all gambling outside of four- or five-star hotels, following the lead of cities like Riga, which enacted similar laws in 2017. In what we’re sure was happenstance, Ventspils’ kiss-off came on Valentine’s Day.