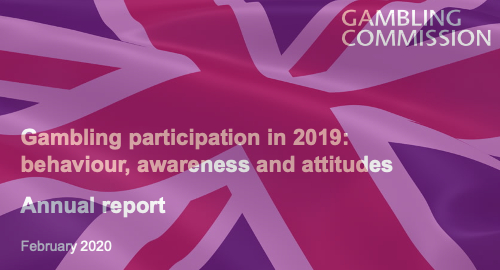 UK online gambling showed a spike in participation both at home and at the office in 2019, while online in-play sports betting continues to fall.

On Wednesday, the UK Gambling Commission (UKGC) released its latest gambling participation survey for 2019, which found that 47% of respondents had engaged in some form of gambling in the past four weeks, up one point from the 2018 survey. That number falls to 32% (unchanged) when you exclude those whose only gambling was on National Lottery draws.

Most online gamblers choose to play at home (95%), although those who sneak in a little play at work was up three points to 15% (largely driven by those in the 45-54 age demo). A slightly smaller number (12%) gamble during their daily commute to work.

The frequency of overall gambling was either flat or down in all categories except those who gamble “once a month, less than once a week,” which rose two points to 33%.

Those who gambled on a machine in a betting shop fell by nearly half to just 0.8% in 2019, likely due to the government-imposed reduction in maximum betting stakes on fixed-odds betting terminals (FOBT) from £100 to just £2 in April 2019.

(The survey contains some problem gambling data but this relies on previously released information from the Health Survey England 2018.)

Interestingly, while the number of online gamblers who bother to read operators’ terms and conditions remains small (21%), a clear majority (65%, +4) of those who did said they found them to be helpful, while 26% found the terms to be unfair.

SOCIAL MEDIA, ADVERTISING
The percentage of online gamblers who follow a gambling firm’s social media accounts slipped three points to 23%, with most of the decline coming via older age demos.

Statistics on weekly viewing of gambling advertising and sponsorships were down nearly 3% across the board, with online gamblers more likely to be exposed to such marketing (and mostly through sports merchandise sponsorship) than those who don’t gamble online.

GENERAL PERCEPTION
The number of respondents who felt gambling is fair and can be trusted fell one point to 29% while those who think gambling is associated with crime jumped five points to 43%. Respondents were most likely to base their opinions on gambling from television news reports (40%) than via personal experience (31%) or newspapers (26%).

While overwhelming majorities of respondents think there’s too many gambling opportunities (82%, +3) and gambling threatens families (73%, +2), three-fifths of respondents believe it should be up to the individual to decide if and when to gamble, although that latter stat was down two points from 2018.