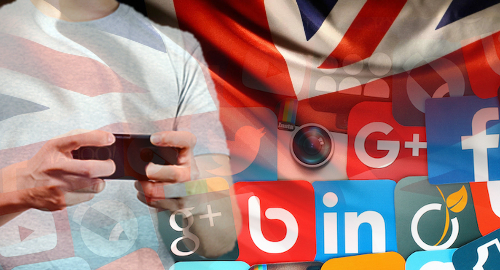 UK gamblers are gambling more on their mobile devices than ever before, but they’re losing interest in online gambling companies’ social media pitches.

On Tuesday, the UK Gambling Commission (UKGC) published its latest gambling participation and perception report, which draws on interviews with around 1,000 random subjects every three months, then combines the results into a rolling year average to smooth out the effects of seasonality.

There are no major surprises in the latest results, which showed 45% of respondents copping to having gambled at least once in the previous four weeks, down from 48% in the 2016 survey. Excluding the National Lottery, participation falls to 31%, down two points year-on-year.

Excluding the National Lottery, online gambling participation remained relatively unchanged at 14%. The average online gambler held four different accounts last year, one more than in 2016, but equal to the 2015 figure.

MOBILE, IN-PLAY AND ESPORTS
As for the devices gamblers use to access their online accounts, the laptop remains king at 50%, although this is down from 60% just two years ago. Mobile phone use gained 10 points to 39%, although those who use either mobile phones or tablets gained eight points to 51%. The once mighty PC slipped to third place with 33%, with male PC users (39%) significantly outpacing females (24%).

Online in-play betting participation was relatively unchanged at 26% but both the 45-54 and 55-64 age demos reported record high participation (albeit still well back of their younger cohorts). The 55-64 demo reported a five-point gain to 14% last year.

eSports betting merited its first mention in this year’s report, and the UKGC cautioned that the sample was taken exclusively online, which could skew the figures upward. Regardless, the figures show 7% of respondents having placed an eSports bet – using money or virtual goods – in the last four weeks, rising to 16% in the 25-34 age demo.

Social media marketing was also increasingly ineffective, with 19% (-2) of online gamblers saying they were prompted to spend money on gambling by a social media post. However, the figure for the 18-24 age demo improved four points to 40%.

By contrast, 53% (+7) of gamblers were prompted to spend money gambling by some other form of advertising. Older gamblers reported the biggest year-on-year gains, with the 55-64 demo up 14 points to 46% and the over-65s up 11 points to 28%.

Free bets and bonuses were the most effective form of advertising, convincing 40% (+8) to spend money. Television adverts were a distant second at 26% (-2), with online adverts third with 23% (+1). Social media advertising (14%, -1) barely outperformed billboards and newspapers.

MEDIA WINNING THE PERCEPTION WAR
Some reliably anti-gambling publications in the UK are seizing on the dwindling number of Britons who believe gambling is “conducted fairly and can be trusted.” A record low 33% agreed with that statement last year, continuing a downward trend since 2011, when 49.3% of respondents viewed gambling as trustworthy.

However, the 2017 figure was only 1.3 points lower from 2016, and respondents who actually gamble produced a score of 38%, unchanged from the previous year. Which suggests that the UK media’s steady drumbeat of negative gambling articles is more effective on people with no firsthand experience of the situation.

Nearly 41% of respondents agreed that “gambling is associated with criminal activity,” up nearly 2.5 points from 2016 but still below the mark set in 2014. Here too, non-gamblers were more likely to agree than gamblers.

PROBLEM GAMBLING MEASURES CAN BACKFIRE
The UKGC said 0.8% of respondents were deemed to be problem gamblers, while 3.9% were said to be ‘at risk’ of developing into problem gamblers. The UKGC conducts truncated problem gambling questionaires for its particpation survey, so the more accurate figures were borrowed from the government’s previously issued Gambling Behavior in Great Britain 2015 study.

Gambling operators have been under increased pressure to provide gamblers with detailed accounts of their gambling activity in order to reduce gambling-related harms. Three-fifths of gamblers reported receiving or seeing gambling info, most of which was based on their individual transaction history (49%), followed by the actual chances of winning a prize (35%).

However, while viewing one’s transaction history can lead to reduced gambling, some respondents claimed the info had no influence on their decisions, while others claimed the info actually increased either time or money spent gambling. This latter category included gamblers who set gambling limits and realized that they’d yet to spend their allotted sum.