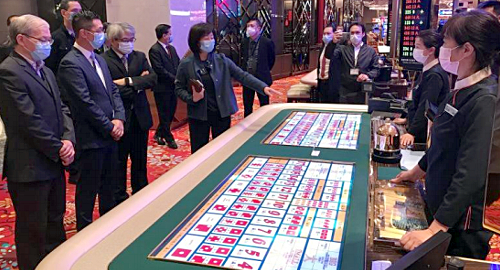 Nearly all Macau casinos have reopened their doors following the coronavirus-related shutdown, although no one expects things to be back to normal for many months to come.

As a condition of re-opening, the DICJ imposed new restrictions on casino operations, including requiring all guests and casino staff to wear face masks, limiting the number of players at a gaming table and not allowing ‘standing bets’.

However, the DICJ’s head of inspection Joe Vong said Sunday that the regulator had received complaints from both staff and the public regarding some casinos allowing a high concentration of players at tables. Vong reminded operators of the DICJ’s guidelines and warned that inspections were being conducted daily to ensure compliance.

Other complaints involved one unidentified casino concessionaire who failed to provide staff with masks, but Vong said the situation had been resolved following the DICJ’s intervention. Another complaint involved a casino that failed to disinfect its gaming chips, which Vong said was due to a shortage of cleaning supplies that has since been remedied.

Regardless of the forward progress, analysts expect February’s gross gaming revenue to fall as much as 90% year-on-year, while the decline for March could fall by 80% if Beijing opts not to lift the current restrictions on individual visit schemes and groups visas to Macau.

It seems unlikely that Beijing will do much to alter the status quo given that official figures released by China on Monday indicated 409 new coronavirus cases and 150 new deaths – up from around 100 per day over the past few days – bringing the death total in China to nearly 2,600. Worse, the recent spread of the virus to other Asia-Pacific countries such as Japan and South Korea will further reduce the flow of gamblers to the world’s largest gambling hub.