He spent the better portion of his coaching career leading the Cornhuskers football team to three national championships, but on February 11, legendary head coach Tom Osborne was in front of a Nebraska legislative committee speaking against a bill that would legalize commercial gambling in the state. 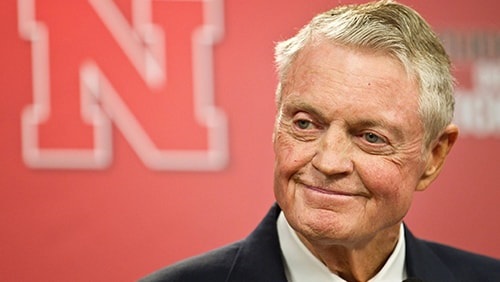 Osborne joined 1972 Heisman Trophy winner Johnny Rodgers in encouraging the legislative body to vote against the gambling expansion. “I’m just a little concerned with some of the problems that might happen in our community as far as expanding the opportunities for people to risk their savings accounts, their mortgage payments, their children’s food money,” Rodgers explained to the committee.

Osborne agreed. “Most of the really unpleasant interactions I had with fans were people who had lost a bet. I think this will change the nature of the stadium, the nature of athletics, and damage it to a significant degree.”

The two may have had great success on the gridiron, but they face a tough battle on this issue. Many within the legislature feel that gambling is a necessary evil, primarily because residents are heading across the border to Iowa to make wagers on sports. A recent survey found that 80% of Nebraskans were headed to Iowa to gamble. This is denying Nebraska the opportunity to reap the benefits of that tax revenue, and this is one of the primary forces pushing the bill forward.

Osborne understands the financial aspect, but he made the human element the key part of his argument.“That’s a dead argument when you say it will bring in tax dollars,” the Hall of Fame Coach explained. “There are all sorts of research that show the social costs created by gambling and the speed of gambling with double and triple the social costs involved.”

State Senator Justin Wayne disagreed, however. He argued that denying gambling in the state seems absurd. “Nebraska is already doing this. There are three casinos right across from my district. And you don’t even have to go across the river anymore to bet; you can do so at the casino in Carter Lake.”

It is expected that the bill will be approved in committee and sent to the full legislative body for a vote. Very few believe that this bill will fail. Already there is a group pushing to legalize gambling, the ‘Keep the money in Nebraska’ group. They have been working to garner the requisite number of signatures to have the initiative placed on the ballot for November.