The XFL hopes to do what the Alliance of American Football (AAF) – and the previous version of its own league – couldn’t.  Football fans have a love/hate relationship with the Super Bowl because it is always a huge celebration, but also marks the end of the season.  This year, that season ended on February 2, and some fans, with a certain amount of guarded trepidation, waded into the inaugural season of the new XFL on February 8.  By most accounts, these first games lived up to the hype, and football fans are generally pleased. 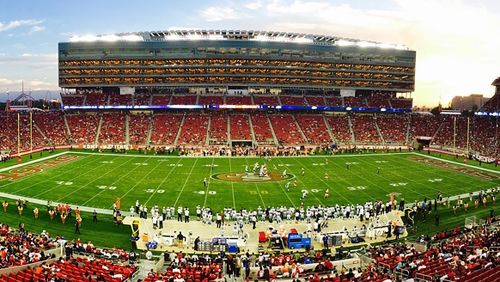 The XFL is giving football fans a way to slowly break the habit until the next NFL season, instead of having to quit cold turkey.  The results are proving to be positive and the action much better than anticipated.  Differences in rules between the NFL and the XFL result in teams having to take more chances, which was seen on Saturday during the inaugural game between the DC Defenders and the Seattle Dragons.  The Defenders were essentially forced to go for it on fourth and six, and it paid off when Rashad Davis caught a 31-yard pass for a touchdown that would give his team the lead.  DC would go on to win the game, 31-19.

That game saw 17,163 fans take a seat at Audi Field, the turf the Defenders share with DC United from MLS.  More than likely, many wanted to see what all the hype is about and get a feel for the NFL alternative, but they walked away more impressed with what they saw than they had imagined.  Sports reporter Darren Rovell pointed out on Twitter, “The XFL, before kickoff, has already surpassed ticket sales revenue for the entire season of the AAF.”

In fact, attendance at all four games was above 17,000 – a good sign for the league’s possibilities.  At home, viewership averaged 3.3 million for the Defenders-Dragons contest, a number that grew to four million in the last 15 minutes.

Players seemed to enjoy it, as well.  Defenders safety Rahim Moore, who spent time in the AAF last year, stating, “It definitely had that NFL environment,” Moore said. “I was just impressed.”

The XFL has to be impressed with the start and is ready for a productive year.  XFL chief operating officer Jeffrey Pollack asserts, “For us, if the fans who attend and watch at home feel as though it was a good football game and they had a fun time either watching or being in this awesome venue with us, that’s success.  We’re taking a long-term view in this. Success ultimately will not be measured in the first game or the first weekend or the first season.”