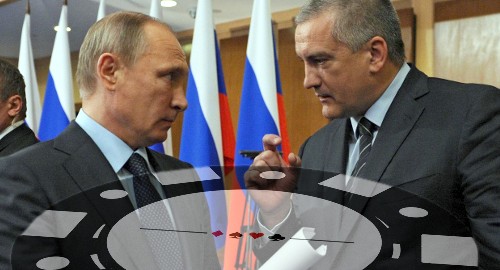 Russia’s plans for a new casino gambling zone in the Crimea have reportedly been put on hold after Russian President Vladimir Putin suggested the region had other priorities.

Last October, Russia formally approved a new casino zone in the Crimean region, which Russia controversially annexed from the Ukraine five years ago. The new gaming zone, dubbed ‘Golden Coast,’ was expected to open its first casino by 2022.

The following month, Russian media quoted the head of the Crimean Republic Sergey Aksyonov (pictured right) saying that three unidentified investors had expressed interest in spending up to RUB3b (US$48.7m) to help develop the new gaming zone. Shortly before Christmas, Crimean officials said they were preparing to sign an investment agreement before the year was through.

Well, hold the phone. Last week, Russian media reported that Putin’s January 11 visit to the Crimea had resulted in edicts to local officials to fix a variety of pressing problems, including “water supply, sanitation and environmental issues that nobody seems to have ever dealt with here.” Putin took particular exception to the state of Crimea’s health care facilities, which he said were “worse than in Russia as a whole.”

Russian media subsequently quoted sources within the Crimean government saying that Aksyonov thought it best not to press forward with any announcements regarding the gambling zone while Putin’s focus was on infrastructure and health care. So it may be a while yet before any Crimean gaming blueprints are unrolled.

The financial sanctions imposed by Western nations following Russia’s annexation of Crimea remain in place, so the investors seeking to develop gaming in Crimea will likely be Russian.

Russia banned most forms of land-based gambling in 2009 outside four geographically isolated gaming zones. Crimea and Sochi were added to these zones in 2014. To date, the Primorye zone in Russia’s far east is the only one to attract the interest of international casino operators.