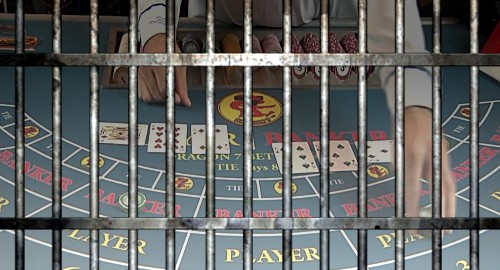 A former casino dealer was sentenced to 18 months in federal prison for his role in a baccarat cheating scandal that took two Maryland casinos for over $1m.

In September 2018, word broke that Ming Zhang, a dealer at MGM’s National Harbor casino in Maryland, had been charged with numerous felonies for his role in a baccarat cheating scam. Zhang reached a deal with federal prosecutors the following month to plead guilty to conspiring to transport stolen funds.

While Zhang faced up to five years in prison, the Department of Justice announced last month that he would spend 18 months in prison followed by three years of supervised release. Zhang was also ordered to repay the funds he helped steal.

According to the DOJ, the scam began in September 2017, when Zhang and ‘co-conspirator A’ – a man identified elsewhere as Chinese national Chenguang Ni – cooked up a scam in which Zhang wouldn’t shuffle all the decks of cards that would be fed into the ‘shoe’ from which players and Zhang would be dealt their baccarat hands.

Zhang later told prosecutors that Ni concocted a way to use his phone to take photos of the decks of cards that were spread out across the table to reassure players that it was a legitimate deck before being loaded into the shoe. Ni would then periodically steal away to the bathroom to study the images, while other co-conspirators Ni had recruited would keep his seat warm.

Ni and these other conspirators would wager small amounts while awaiting the unshuffled cards to make their appearance, then they dramatically boosted their wagers. The scam was rumbled after Ni and the other players went on a major lucky streak, winning 18 of 21 hands, including 14 straight wins, in a game in which the odds are essentially a coin-flip.

All told, the scammers netted over $850k from National Harbor and nearly $200k from a second unspecified casino. Ni was sentenced to 13 months in prison and will likely face deportation once his prison term is up.

Baccarat cheats have come up with some ingenious schemes over the years. In 2012, a gang colluded with a Macao casino worker to swap a legit card shoe with one that had a built-in miniature camera that read the cards as they were shuffled and transmitted the slo-mo video to the conspirators.

That same year, a similar shoe switcheroo occurred at South Korea’s biggest casino Kangwon Land, while the year before saw a Philippine casino targeted by gamblers with miniature cameras hidden up their sleeves. All these scammers were eventually rumbled by casino security, whose surveillance traditionally proves capable of identifying scams, even if it may be after the fact.