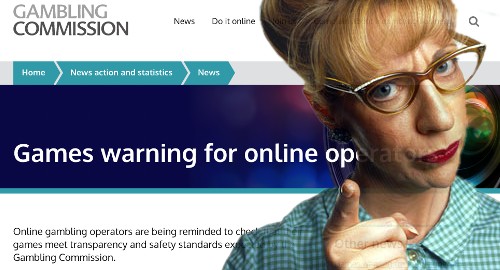 UK online gambling operators have been warned to uphold transparency and safety standards in their products or face regulatory smackdown.

On Friday, the UK Gambling Commission (UKGC) issued a ‘games warning for online operators,’ citing the regulator’s discovery that six of its online licensees were offering products that offered ‘feature buy-in’ facilities on ‘slots style games.’

The games in question allowed players the chance to stake “significant” sums to access a bonus offer without the need to play through the game’s initial stages. The UKGC said one of these games was charging “more than £3,000” to accelerate access to the bonus offer via this method.

While all six of the offending operators have since removed the ‘feature buy-in’ element from their games, the UKGC saw fit to remind all of its licensees that its online gambling software technical standards prohibit products from actively encouraging customers to increase their stake or the amount they have decided to gamble.

In other UKGC news, the regulator briefly posted an announcement to its website declaring the establishment of a series of working groups aimed at further reducing the potential for gambling harm. The notice was almost immediately taken offline for as yet unknown reasons.

The announcement cited four licensees – GVC Holdings, Playtech, Scientific Games and The Stars Group’s Sky Betting & Gaming (SBG) subsidiary – who would be working with the regulator to further the aims of these groups.

GVC was tipped as helping the UKGC deal with operators’ VIP gambling programs, specifically, the incentives that operators provide their high-rollers to ensure they keep gambling. These VIP programs recently came under fire following the disclosure of an internal UKGC report that revealed the scale to which VIPs contribute to operator deposits.

SBG will reportedly assist the UKGC’s working group on gambling advertising concerns, while Playtech and Sci-Games will work to develop a sector-wide policy for game design, presumably to ensure that the aforementioned ‘feature buy-in’ and other ill-advised incentives don’t lure vulnerable gamblers down the garden path.

UKGC CEO Neil McArthur said the four firms would provide “expertise and experience” to the working groups, which aim to “achieve the reduction in the numbers of people experiencing or at risk from gambling-related harm that we need to see.”

The UKGC recently announced that gambling on credit cards would be off-limits as of April 14 and McArthur said Friday that he wanted to see licensees make serious progress on reducing problem gambling by that date.