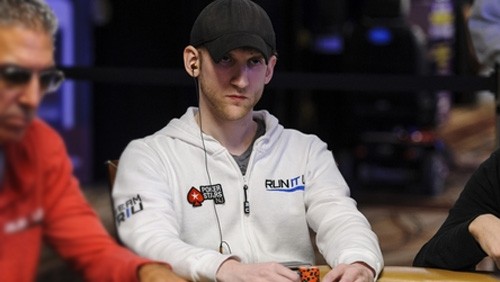 After revolutionising poker on Twitch, PokerStars ambassador and long-time Twitch king Jason Somerville has decided that his ability to ‘Run It Up’ is over.

Somerville’s decision to leave PokerStars can’t be labelled a big surprise, purely for the number of recent players he follows in the footsteps of in walking away from the poker brand.

In the last 10 weeks alone, Daniel Negreanu, Liv Boeree and Igor Kurganov have said goodbye to the Red Spade, and Somerville branching out from PokerStars won’t have shocked many observers. It is, however, a surprise announcement, purely because Somerville sees himself moving in very different spheres in the near future.

In an at-times emotional Twitter video, Somerville described a ‘new chapter’ to his life, that being sports betting. While he’s enjoyed his time at PokerStars, and of course in particular his time building Run It Up into one of the most recognisable sub-brands in poker, it’s clear that he is looking forward to breaking free from corporate sponsorship and controlling his own destiny in a more linear way on his own terms.

Somerville has proved a smart cookie. You could easily make the argument that his content has revolutionised Twitch for poker players, pushing the platform to new popularity and changing the approach poker professionals have towards sponsorship in general.

The old model of being a poker ambassador was one that was titled in favour of players to a much heavier degree. Poker brands saw players as badges to wear on a trendy jacket, a selling token that would be rewarded for winning big and used to attract aspirational poker players to the idea that a major win was only a badge away – a PokerStars Red Spade badge.

Somerville’s Twitch legacy is not so much about purely how far his own content has reached, commanding as he did almost a quarter of a million subscribers by the end of his time broadcasting his poker channel. It is more about the reach that Twitch now has for poker players, and how important a player’s social reach is to their potential chances of sponsorship.

Times as a sponsored pro have changed, and Jason Somerville’s Twitch channel has made positive changes to the industry, so what’s next for the former PokerStars pro?

As he says, “It was tough being limited by my PokerStars exclusivity on the content that I could create.”

While Somerville pushed his Run It Up brand above and beyond anyone’s expectations, the Twitch channel titled ‘Runitup247’ is co-owned by Run It Up and PokerStars, so a clean break is needed and Somerville is head-over-heels for sports betting.

With recent changes to sportsbetting meaning that, hopefully like online poker, the market will grow across America in the next 12 months, Somerville will look to become a key part of how the industry develops.

With a loyal fanbase, a solid place in a related industry and plenty of crossover skills that apply to a similar area of growth within another gambling-related area of business, it seems highly likely that the king of poker Twitch will be able to take his crown and wear it well when it comes to sportsbetting.

Here’s his Video Statement in full: