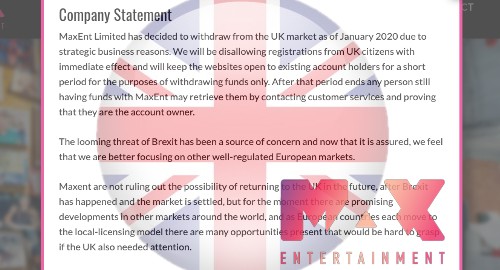 Online gambling operator MaxEnt Ltd has withdrawn its brands from the UK market, citing “recent political events” as a catalyst.

Over the holidays, the Malta-based Max Entertainment announced that it had “taken the decision to close its operations towards the UK market for strategic business reasons.” The company said Slotty Vegas and its BETAT Casino brand would suspend game play on January 2, while customers would have until March 31 to withdraw the balances in their online casino accounts.

MaxEnt had its UK license revoked by the UK Gambling Commission (UKGC) last June following “identification of concerns relating to the operator’s finances and information supplied” to the UKGC regarding the company’s ownership structure. The revocation was stayed two weeks later after MaxEnt filed an appeal of the regulator’s decision.

MaxEnt’s statement expressed regret at its decision to exit the UK market after six years of operation, but said it was the “correct” move due to “the uncertainty that this market currently holds for us, particularly due to recent political events.”

Said political events include the Tories’ convincing win in the UK’s recent general election and the confirmation that the UK’s ‘Brexit’ from the European Union is now a dead certainty. The Tories have also promised to conduct a review of the 2005 Gambling Act with a potential ban on credit card use for online gambling among the items under consideration.

MaxEnt stated that it wasn’t ruling out the possibility of a UK market return “after Brexit has happened and the market is settled,” but the company would now consider “promising developments in other markets around the world,” with a particular focus on “other well-regulated European markets.”

MaxEnt CEO Greg Bennett added that his company expects to receive its Swedish license this month and MaxEnt would also seek to operate in the Netherlands when that country launches its regulated online market in mid-2021.