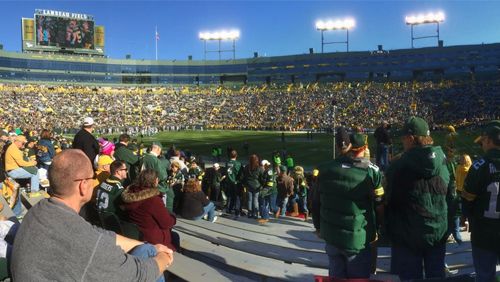 After 17 short weeks, the NFL season is finally coming to a close. But with the playoffs just days away, the betting never stops, and our Bodog insider was hard at work as all the last games came to an end.

A big mismatch and a huge comeback combined to make a lot of pain for the house in Detroit. “The Packers closed as -13.5 road favorites against the disappointing Lions,” our insider noted. “The Packers started off slow falling behind 20-3 but if the Lions are known for anything it’s falling apart in the 2nd half of games that they’re winning. The Packers in-game moneyline got as high as 3/1 leading to the biggest live betting loss of the day.”

Our insider thought it would be cute to pick on Winston a bit, but that doesn’t always work out so well. “The Tampa Bay QB put up big numbers this year throwing for 4900 yards and 31 touchdowns, both career highs,” he noted. “Unfortunately, Jameis likes to spread the ball around a little too much as his 28 interceptions led the league. Before the Week 17 finale against Atlanta we posted “What would Jameis have more?” with the two options being Touchdown (-200) and Interceptions (+150). In poetic fashion, the Bucs began overtime with a Jameis Winston pick-6 and he finished with 2 TDs and 2 INTs for the game – a push.”

Finally, the NFC East has a winner, despite being one of the worst divisions this year. “The Eagles closed as -3.5 road favorites against the Giants with a chance to clinch the NFC East despite more injuries to their starting offense than any other team in the league,” he noted. “The defense played well and forced Daniel Jones into enough mistakes for the Eagles to pull away late, 34-17.”

Nobody expected much from the team from Teneesee this year, but sometimes in football, all you need to be is a bit lucky. “The Titans were 3/1 to make the playoffs before the season started but a surprise offseason retirement by Andrew Luck proved fruitful for Tennessee who clinched with a 35-14 road win over the Texans.”

Our insider wrote in before the Sunday night game ended, but he let us know a lot was riding on the Seahawks winning in underdog fashion. “Seahawks moneyline +150,” he noted as the biggest position. “The winner of Sunday night’s finale between Seattle and San Fran will win the NFC West and a 49ers win would give them the NFC’s #1 overall seed.” San Francisco won the game 26-21.