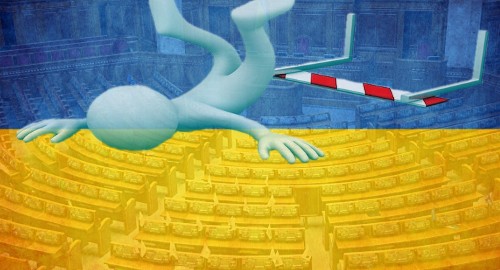 Ukraine’s gambling expansion plans failed to clear their first legislative hurdle, and the government is retaliating by shutting down land-based slots operators.

On Thursday, 213 members of Ukraine’s Verkhovna Rada legislative chamber voted in favor of Bill 2285-d, which aims to dramatically expand the country’s list of legal gambling options, including land-based casinos and online casino, poker and sports betting. But the vote fell 13 votes short of a majority.

The rejection wasn’t fatal, as a second vote secured enough votes (243) to send the bill back to committee for further tweaking after which it will be sent back to the Rada for another first reading vote.

Ukraine’s gambling expansion plans were first introduced in October but have undergone significant revision after six additional gambling bills were filed in November. These bills have since been consolidated under a single bill and include some dramatically hiked license fees.

Ukraine’s government sets a monthly minimum wage of UAH4,170 (US$179), and the proposed annual fee for online casino licenses is the equivalent of 12,500 minimum wages, so $2,375,000 per year. Licenses are valid for a five-year span, bringing online casinos licensees’ total outlay to nearly $11.2m.

If you think that’s steep, consider that bookmakers (licenses would be valid for both online and land-based wagering) would pay 120,000 minimum wages while online poker operators would get away comparatively easy, paying just 2,500 minimum wages.

Land-based casino operators would pay a fee ranging from 30k minimum wages to 120k minimum wages based on a number of criteria, including how many hotel rooms they offered and whether or not they were based in the capital Kiev. Operators would pay additional fees for each gaming table (with higher rates for roulette tables, which apparently are all the rage in Ukraine).

The draft legislation also proposes allowing anyone over the age of 18 years to gamble, a break from the previous 21-year minimum. The fluid nature of Ukraine’s regulatory plans can’t be understated, so expect further revisions to these plans in the coming weeks.

ZELENSKY CRACKS DOWN ON ILLEGAL OPERATORS
On Friday, Ukrainian President Volodymyr Zelensky criticized the Rada’s failure to approve the gambling bill, saying “we know who is behind” the negative vote. Zelensky posted a message to his personal Facebook page saying that if existing gaming operators don’t want to “play by transparent rules” then “we’ll close all gambling halls.”

Zelensky’s missive was followed by word that Ukraine’s Cabinet of Ministers had issued a decree that “all gaming clubs, lotteries and gambling establishments should be closed.” Prime Minister Oleksiy Honcharuk issued a statement clarifying that “establishments with slot machines will not be able to illegally work under the guise of state lotteries.”

Police didn’t wait for the official starting gun, having reportedly shut down 152 illegal gambling facilities as of Thursday night and seizing gaming equipment worth UAH46m (US$2m).

Despite the government’s efforts to modernize its gaming sector, the Ukrainian public remains opposed to gambling expansion. A recent survey found only 18% of respondents fully supported legalization of new gambling products. Of those who do support legalization, support was highest for lotteries (49.7%), followed by sports betting (22.1%), casinos (18.7%), online casinos (9.5%) and poker (6.9%).