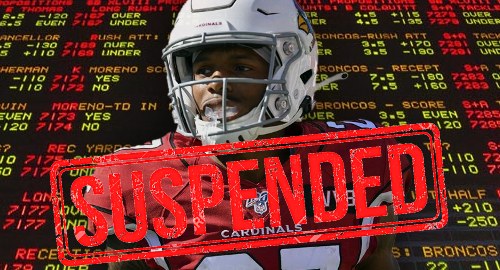 The National Football League has suspended Arizona Cardinals defensive back Josh Shaw for at least the rest of the current season for betting on NFL games.

Late Friday afternoon, the traditional dumping ground for unfavorable corporate developments, the NFL announced that Cardinals cornerback Josh Shaw had been “suspended indefinitely through at least the conclusion of the 2020 season for betting on NFL games on multiple occasions.”

Shaw, who is currently on injured reserve, hasn’t played a snap this season. The downtime apparently left him with too much time on his hands and he decided to spend it (and an undisclosed amount of cash) wagering on the outcome of games.

The method by which Shaw placed his wagers wasn’t specified, but Arizona has yet to join the growing list of states that have authorized wagering since the US Supreme Court struck down the federal sports betting ban in May 2018.

Shaw will be able to petition the league for reinstatement as of February 15, 2021. In the meantime, he has three days in which to appeal his suspension under the terms of the NFL’s collective bargaining agreement with the players’ union.

The NFL stressed that there was no indication that Shaw’s wagering relied on any inside information or compromised the integrity of any games. NFL Commissioner Roger Goodell added that it was up to all NFL players, coaches and other staff to “safeguard the integrity of the game” and reminded everyone that “if you work in the NFL in any capacity, you may not bet on NFL football.”

Given that this the league’s first betting-related suspension in 35 years, the NFL will presumably be pressed much harder in the coming days to explain how it learned of Shaw’s activities, how much money was involved and how far back Shaw’s betting was going on.

The Shaw incident underscores why the NFL has been so reluctant to strike a sports betting deal that might have any serious profile with its domestic audience. While the league has struck a wagering partnership with Australia’s Tabcorp and has inked a daily fantasy sports pact with DraftKings, it has so far been far less enthusiastic about embracing gambling – particularly sports betting – than the other major North American leagues.