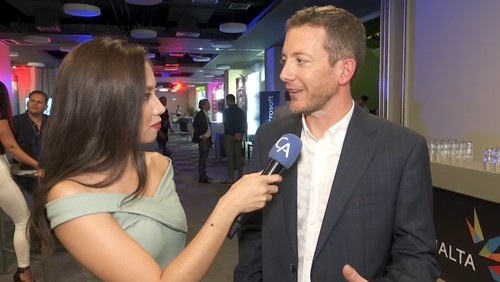 Innovation can be quite hard in the gambling space, where many of the games offered have been around for decades, if not centuries. But with a technological partner like Microsoft, and Senior Engineer Manager Karl Davies-Barrett, it’s possible to combine creativity with innovation and really get ahead. He joined our Stephanie Tower recently to discuss just how to do that.

Innovation just for its own sake might be nothing, so focusing on who it serves is vital. “For me, it always starts with the customer,” Davies-Barrett told us. “If you focus everything around the customer, in this case, in the iGaming industry to player, you always have an anchor point. That’s what you want to deliver, is a great experience.”

But what do you deliver to that customer still has to be quality, and Microsoft helps with that. “Creativity is super important because you need to differentiate yourself,” he said. “So Microsoft as a technological partner can be that differential. What you want to do is stand on the shoulders of giants, so to speak. If you look at the Microsoft platform and our industry expertise, we’ve got that expertise. We’ve got that in terms of business expertise, people on the ground, technical expertise in engineering. We’re leading in the way when it comes to artificial intelligence and creating new markets.”

With so many new technologies starting to come on the scene, Tower asked Davies-Barrett what excites him most. He had a lot to choose from. “I’m excited about artificial intelligence,” he began. “I don’t think it’s going to be the doomsday that everybody’s predicting. We’ve still got a long way to go anyway. Interesting that Microsoft is talking about artificial general intelligence, so near human-like parity. 5G and actually be given connectivity to people to offer those services in a creative manner, so from the telco side, I think that’s going to be something that’s going to change our lives as well. And that coupled with IOT (internet of things). So being able to gather information and telemetry from cars, from every device that you use. The connected world is going to be something is going to change I think for everybody.”

Microsoft has built a tremendous presence in the gambling world, and that comes from decades of experience of innovating in every possible way. “We’ve worked in the esports industry and we’ve disrupted that,” he noted. “We’ve done a lot of disruptions to teams like Real Madrid’s fanbase. We’ve brought new experiences to them. We are present with Xbox and the gaming industry. We’ve brought games to life on a massive scale. So our experience is there. In Malta we’ve actually worked with a lot of the gaming companies already, where we’ve actually had questions from them already, where we’ve actually had questions from them asking about how do they light up their data, how do they do things with their data.”

With his years of experience, Tower asked Davies-Barrett to leave us with one lesson he’s taken from his travels. “One thing I’ve learned is that you never stop learning,” he replied. “Unfortunately in order to learn, you have to be open to it. One thing I learned very quickly is that if you have a closed mindset, you won’t learn. You need this growth mindset.”

He ended with this lesson:

“The whole point is not to fail, the whole point is to try things. And if you fail, great, you move on, but it’s always been learning. If you stand still in this industry, you are eradicated pretty quickly by the industry. Pick you up, spit you out and move on without you.”