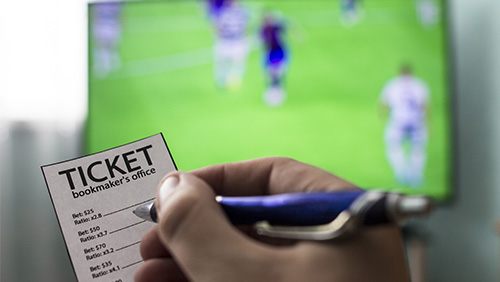 The sports gambling industry in the U.S. is expected to be highly lucrative. Estimates vary on how much can be earned, but the initial activity across the past year shows that there is definitely money to be made. It’s not uncommon for casinos and gaming operators to want to get in on the action, but a new entity is coming in from way out in left field. An investment brokerage is reportedly interested in participating in the growing sports gambling realm.

TD Ameritrade is a massive discount brokerage traded on the NASDAQ exchange. It’s a common name in the investment world but feels that the time right to expand into unchartered waters. The company’s chief information officer, Vijay Sankaran, recently told Business Insider, “We do feel like there are interesting analogs in applying market constructs to fantasy-sports-type things.”

The brokerage may have developed a taste for sports wagers after having struck a deal with ESPN. It has been involved with the sports network to offer analytical data for the fantasy sports segment to help players strengthen their lineups and team performances, and that partnership gave TD Ameritrade a taste of the sports gambling industry.

More than an attraction to sports gambling, though, there’s another reason why the brokerage, as well as others might be looking to get in on the action. Virtually all of the big-name brokerages – TD Ameritrade, Schwab and others – recently shot themselves in the foot after they decided to do away with commissions on certain trading options. As a result, revenue took a slide and the companies need to find innovative ways to recuperate their losses.

TD Ameritrade’s chief financial officer, Steve Boyle, seemingly confirmed the huge impact commission-free trades were having on the company last month. In a statement he authored in October, Boyle asserted, “We expect this decision to have a revenue impact of approximately $220 million-$240 million per quarter, or approximately 15-16 percent of net revenues, based on June Quarter fiscal 2019 revenue.”

It doesn’t appear that the brokerage wants to launch its own sportsbook (but who knows what the future has in store) but, rather, would perhaps be involved in some ancillary manner. Sankaran indicates that the company is only just beginning to explore the possibilities and hasn’t determined a direction yet. However, it has been busy conducting focus groups in an effort to gauge the level of interest its customers have in sports gambling.

That interest is apparently very high, leading the company to believe that the industry “may be a space [it] can play in.” In response to a request for comment from Forbes, he added, “We’re in the early stages of exploring this space, and although we won’t comment on any specifics, we are always evaluating potentially innovative products and services that may attract new customers.”