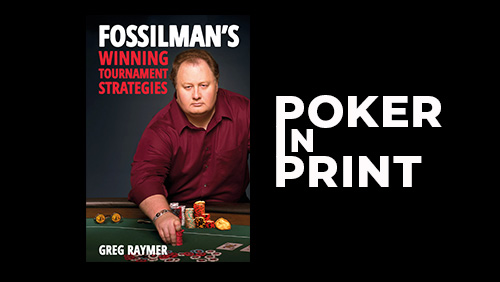 Plenty of poker books cover strategy, while others describe the process of achieving success. Few blend the two, and when they do, they’re rarely written by a player who has won the World Series of Poker Main Event. But then, there is nobody quite like Greg ‘FossilMan’ Raymer, who took down the WSOP Main Event in 2004.

Raymer’s book, FossilMan’s Winning Tournament Strategies, was published this year, 15 years after the poker event that changed his life. In it, Raymer hopes to pass on some of his accumulated knowledge, as well as bringing that fateful title to life. He was, however, always at heart a poker player who thought about teaching the game, too.

“I got into poker seriously about 12 years before winning the Main Event in 2004,” says Raymer, “Almost from the beginning I was involved in online poker discussion. First, with the RGP [rec.gambling.poker] newsgroup, then later on the 2+2 discussion forum. I read and wrote a lot of posts on those sites, and always enjoyed discussing strategy with others.”

Raymer’s natural love of the game bleeds through every page of his book, and it’s that passion for poker that led him to teach the game.

“I have also always gotten great joy from teaching others, in any subject. That is why I love the live poker seminars that I do as often as possible. I had intended to write a book right after winning the Main Event, but my natural tendency towards procrastination won out. Only now have I finally gotten it done.”

Becoming world champion changed Raymer’s life beyond his expectations. Before the game, he was a corporate lawyer, and made the switch look easy. He puts that down to the joy he takes from competing.

“I have loved poker from the beginning, and still love it.” says the champion known as ‘FossilMan’ thanks to his hobby of collecting fossils and even using one as a card protector. “While I also enjoyed my career as a patent attorney, it wasn’t as much fun as poker. Now I can focus on poker as much as I want and make my living teaching and competing. Instead of being a corporate lawyer with a mostly 9-5 job, I now spend about half my time on the road. That has been great, since I get to spend so much more time on poker. But it has had a huge downside, in that I spent a lot less time with my wife and daughter than I otherwise would have done.”

Raymer’s love of the game and passion for it may make demands on his time, but it also comes naturally. His affinity with mathematics is a factor he believes has been a major part of his success as a player.

“I am naturally good at math, and at thinking about things in a very logical and unemotional manner. The math has always been the easiest part of the game for me to learn and apply.”

While his mastery of numbers is an obvious plus, Raymer identifies a lack of psychological understanding as an area he intuitively has to work hard to compensate in.

“The psychology of the game, the ability to read players and manipulate them, is not my natural strength. Those are the aspects I have spent most of my time on all these 25+ years I have been playing. I utilize my strengths but work harder at improving where I am weakest. That has been the most significant reason for my success at the tables.”

One of the modern aspects of the game that Raymer has a deep grasp of is ICM, or the Independent Chip Model that along with strong mathematics, gives tournament players an understanding of whether certain key decisions are correct with regard to money places.

“You can be an excellent player without ever learning what ICM is or considering it in any of your decisions.” says Raymer, however. “It is just one more variable that can be considered in a tournament setting to modify the decision you would have otherwise made. For example, let’s assume a scenario where an opponent has gone all-in, and you are considering the call. If you do a cash-game or chip-count analysis of the decision, you might decide that it is correct to call. However, if you also consider any appropriate adjustments for ICM, if that call was correct but only by a small margin, then it might be a smarter, more profitable decision to fold.”

As Raymer describes, ICM shouldn’t replace other decision-making options, moreover just be another tool you can pull out of your toolbox during a game.

“If, instead of considering ICM, you weighed the value of any tells you have spotted in the opponent, you might likewise decide that the smarter decision is to fold. Similar to tells, ICM can lead you to correctly change your strategy and make a different decision. The main difference is that unlike tells, ICM has no psychological or subjective component.”

“I really like both cash games and tournaments, but I play a lot more tournaments. This is mostly because while I think no limit hold’em is a great tournament game, I also think it is not a good cash game. Most places I travel, it is the only cash game available. If I could find more draw games, stud games, and even better, mixed games, then I would play a lot more cash.”

Raymer famously won the WSOP Main Event in 2004, but also ran deep the next year in what was a superb achievement in its own right. It presented some challenges at the table.

“I find that it is much harder to steal small pots than it used to be. Before I won the Main Event, I would say that one of my greatest strengths was recognizing when nobody had a strong hand, and then stealing a lot more than my fair share of those small pots that were up for grabs. Now, I find this very hard to do, as players simply tend to not fold against me.”

The aggression other players show to Raymer is purely from wanting to ‘take down the champ’, of course. But it’s led to FossilMan having to make changes so as not to become a dinosaur. “Sometimes they even call with hands that might lose even if I am bluffing. So, I steal or bluff a lot less, but value bet a lot more, and a lot thinner than I otherwise would do. It would be really fun and interesting if I could play in disguise. Not to be tricky, but just to see how different it would be for me if I looked like just some random middle-aged white guy, rather than me. I think it would be very different, but maybe I’m wrong. I will never know.”

Note to self: Buy a Disguise-Yourself-So-Even-Your-Mother-Won’t-Recognise-You Kit and donate it to Greg Raymer just for the WSOP thrills. Away from the game, Raymer remains a patent attorney and is always looking for new and interesting cases, especially since his daughter grew up and moved out of the family home. Raymer, however, realises that what he has to add to poker is often related to passing on the lessons he has learned. If he has one wish in poker, it is for a certain accolade to come his way.

“It would be amazing to be voted into the Poker Hall of Fame. I’m not holding my breath, and do not expect it to happen, unless I go on a huge rush and start winning a lot of tournaments again. If that did happen, it would be a great honour, but that is more of a dream than something that I think could actually happen.”

When it comes to practical advice for those wishing to follow in the FossilMan’s imprints, Raymer is both succinct and direct, in the patriarchal style of a good teacher with little time to pass on that crucial platform.

“Pick what games to play, and then just try to make each decision the best I can. Results are something that happen after you make decisions. You cannot make them happen. But if you play the best you can, and constantly work on improving your ability to make the best decisions, you are that much more likely to get the results that you want.”

It’s good advice that could apply to most jobs, relationships or life in general. Raymer will keep taking that advice himself and sees the chances of him retiring from poker as slim-to-nil, being more likely to be caused by a ‘zombie apocalypse’ which ‘outweighs the odds on losing interest.’

The good news for us is that another book is coming in the future.

“I am already writing my next book and I will very likely write a lot more after that. I might travel a lot less at some point, but it is hard to imagine not wanting to play.”

It may be hard for the FossilMan to see himself not playing poker, but it’s even harder for his fans to imagine the game without him. He might be around a long time, but his influence on the game will become his permanent inscription on the landscape. The FossilMan indeed.

You can buy FossilMan’s Winning Tournament Strategies via D&B Publishing along with a selection of other poker books, right here.