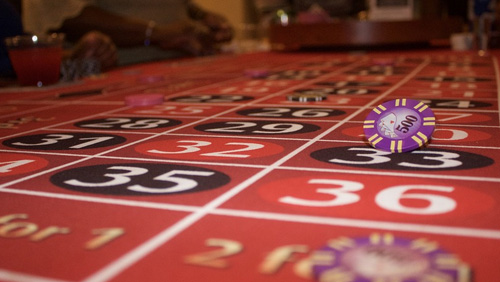 A defense attorney in Illinois is going to try to use semantics to have his client found innocent of making a bomb threat inside a casino earlier this year. Mustadin Muadinov allegedly made the threat this past April at the floating Hollywood Casino in Aurora, but the reaction came only because everyone “misunderstood” what he was trying to say. Just because the Muslim man wanted Allah to “take over and destroy” the casino, didn’t mean that he wanted to do any damage. At least, that’s the attorney’s story and she’s sticking to it, according to the Daily Herald.

Muadinov was in the casino on the Fox River on February 12 when he reportedly got into a dispute with employees. He proceeded to tell casino staff that he had a “gift” for President Donald Trump and said that he would send his prayers to Allah if they didn’t immediately take him to speak to the leader. He also ranted about the way waitresses were dressed, perhaps believing that they would be more properly clothed if they were wearing burqas.

Given the fact that he had shown up driving a large box truck and leaving it in a no-parking area near the casino, staff became concerned and called in the threat to police. The casino had to be evacuated for about six hours while a search of the area was conducted, but no explosive devices were found. 150 police officers were called to the scene to help maintain order and conduct the search.

Brenda Willet, Muadinov’s public defender, argues that the Turkish national was “essentially homeless” and had been living out of the truck since separating from his wife. She added that he only went into the casino because he was cold, and his actions and words are being completely taken out of context.

Prosecutors disagree. They explained in court that Muadinov knew exactly what he was doing and saying, and that he even cased the casino for about two and a half hours the day before. Illinois Assistant State Attorney Joe Cullen asserted, “The defendant was intentionally non-specific when he conveyed the message. The defendant transmitted the threat through words and actions. He continued to make these inflammatory statements.”

Threatening to ask a deity to let destruction and mayhem rain down seems to be borderline terrorism, domestic or otherwise. Granted, Allah would never appear in the clouds and actually follow through with the request, but the intent of Muadinov’s message seems to be clear to prosecutors – similarly to how yelling “fire” in a movie theater has already been shown to lead to legal retaliation. If the court agrees, he’s facing anywhere from probation to as many as five years in prison for “felony disorderly conduct/false bomb or deadly substance threat.”