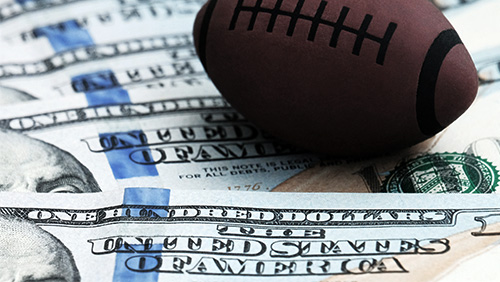 Perhaps the assertion that $150 billion was shipped off each year from the U.S. to offshore sportsbooks wasn’t so exaggerated. Sports gambling opponents scoffed at the number as the Supreme Court was working to reverse the Professional and Amateur Sports Protection Act of 1992 (PASPA) in May 2018, but new figures on how much was taken in this past September adds credibility to the figure. The handle for the month as almost $1.4 billion, and that’s with only a small handful of states – 13, to be exact – offering legalized sports wagers.

The tally was provided by the American Gaming Association (AGA), a group that campaigns for further legalized gambling across the country. The group recently pointed out that there are now 52 million Americans who can place legal sports bets in the U.S., three times as many as what was seen a year ago. At that time, only six states – Delaware, Mississippi, Nevada, New Jersey, New Mexico and West Virginia – had authorized the activity.

$7.8 billion in wagers were taken during the first nine months of the year, $1.2 billion more than what was seen across all 12 months of last year. This figure can expect to jump exponentially, thanks to new legislation in several more states that are preparing to roll out legal sports gambling markets. Among these are Illinois, Montana, New Hampshire, North Carolina, Tennessee and Washington, DC.

In addition to the expansion of legal states, the legal framework is going to be key to greater growth. How operators are licensed and taxed will make a huge difference and how the activity is allowed will also play a major role. Mobile sports gambling will be a sure bet that states will capture a larger amount of gambling dollars, as states that offer Internet-based platforms are overwhelmingly seeing greater online wagers. In New Jersey, for example, 82% of all bets come through mobile solutions.

New Jersey was the state that got the ball rolling for legalized sports gambling in the country and has been rewarded handsomely for its efforts. Being one of the first to have a flexible program, including online platforms, it has been able to attract gamblers from New York, Pennsylvania and others, all of whom only have to cross over the border, find a place to stop and place their bets.

Gamblers are going to gamble – this has already been unequivocally substantiated by numerous studies. The only logical course of action is to respond favorably and capture the economic benefit the activity will provide. This is also the only way to ensure that consumers are protected from shysters and scammers. The sooner states realize this, the better off they’ll be.