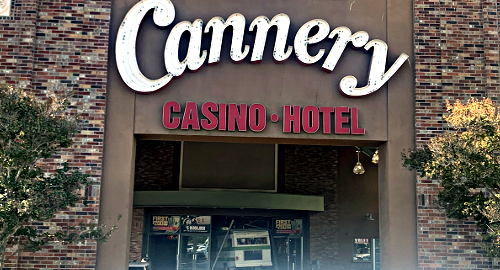 The Cannery Casino Hotel in Las Vegas is a crime scene after an angry customer intentionally rammed her recreational vehicle through the property’s glass doors.

Early Friday morning, police were called to the Cannery after getting reports that a 50-year-old woman had driven a Winnebago into the property’s main entrance, leaving the vehicle stuck half-in, half-out of the glass doorway.

Police arrested the woman, who was said to have been ejected from the property for trespassing on Thursday night, only to return at around 5am Friday. While her motive remains undetermined, she wasn’t believed to have been under the influence of drugs or alcohol at the time.

By the time the RV came to a halt, a 66-year-old Cannery custodian was found trapped under the vehicle. The employee, who was reportedly outside the casino when he was struck by the RV, was critically injured but is expected to survive.

Cannery staff told local media that the as-yet unidentified woman continued to try to accelerate through the doors even after the vehicle’s forward progress had been halted, after which Cannery staff forcibly removed her from the vehicle. Police said they intend to file numerous charges against the woman, including attempted murder.

The Cannery is still operating, although its valet area and main entrance are currently off-limits. Boyd Gaming, which acquired the assets of Cannery Casino Resorts in 2016, issued a statement saying the company was “focused and concerned on the welfare of our team member.”

Amazingly, this isn’t the first such incident involving wheeled conveyances other than wheelchairs and senior citizen scooters trying to squeeze through a Vegas casino doorway. In 2014, a man on a six-day cocaine and alcohol bender crashed his Ford F150 pickup truck through the glass doors of the Stratosphere Casino.