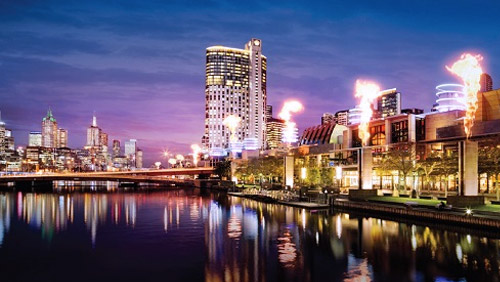 As if Australia’s Crown Resorts didn’t already have enough to worry about, recently becoming the focus of a money-laundering probe on top of all its other woes, it will now have to find a way to dance around a new accusation. According to the country’s ABC News, two Crown-branded casinos allowed an Indonesian man to gamble away millions of dollars at their properties. That alone wouldn’t be newsworthy, but the man is Joseph Wong Kiia Tai, an arms dealer who wasn’t even supposed to be in the country.

Kiia Tai is linked to Charles Taylor, a vicious warlord out of Liberia that later became that country’s president. He has reportedly arranged for thousands of weapons to be delivered to Taylor’s forces, which landed him on a United Nations (UN) sanctions list that, among other things, should have prevented him from being able to travel. Despite his high-profile status, Kiia Tai was able to gamble $6 million at the Crown Melbourne and Crown Perth on separate occasions between 2004-2015 after the sanctions had been put in place.

The businessman was head of Oriental Timber Company, which was given rights to log about one-quarter of Liberia’s rainforests – one-sixth of what is found on the entire African continent. Instead of paying taxes on the timber, he struck a deal with Taylor to supply him with weapons as the warlord sought to win a civil war with Liberia’s neighbor, Sierra Leone. During that war, over 150,000 people, including innocent women and children, were murdered.

Crown has come under fire previously for manipulating government controls in order to bring in VIPs to the country, bypassing established background checks. It has been accused of not properly vetting its gamblers, an assertion that seems to be confirmed by the news report. Australia’s Department of Home Affairs told the media outlet that it was aware of the criminal’s visits to the casinos and adds that it “thoroughly investigates instances of misuse of the visa system and takes action to mitigate against further occurrences, where appropriate.”

Given the recent money-laundering accusations, allegations of gambling machine tampering, reported ties to entities that might be linked to different mafias and now the assertion that it allows war criminals into its casinos, Crown continues to face an ever-mounting pile of negative public relations nightmares. It’s no surprise that James Packer had to step down from the company to save his mental health.