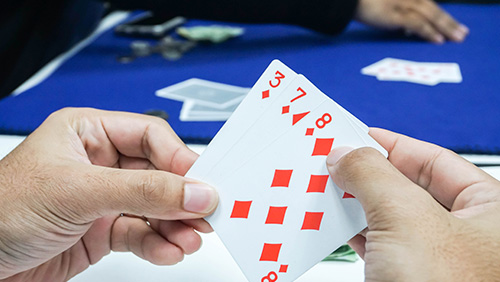 American high roller superstar Sam Soverel is on the march again in a Poker Central High Roller Series. Coming into the British Poker Open, the one player others won’t want to have seen sitting

down next to them was Sam Soverel, who famously won the 2018 High Roller of the Year with 20 cashes across the series.

The American’s triumph last year saw him win titles in No Limit Hold’em, Pot Limit Omaha, and Short Deck events, which earned him rake-free entries into every single high roller event that took place at the Aria this year. That doesn’t include the British Poker Open, of course, but Soverel didn’t think twice about hopping on the plane to London in the hope of putting himself in pole position to take home another series trophy.

After the three opening events of the 2019 British Poker Open, Soverel has lived up to this brilliant reputation by finishing as runner-up both to George Wolff in yesterday’s Event #2, the £10,000-entry Pot Limit Omaha event and today’s Event #3, the £10,000 No Limit Hold’em event, which was won by Paul Newey.

Today’s latest British Poker Open final table which saw Newey triumph over Soverel may end up being pivotal to Soverel’s hopes of finishing top of the BPO leaderboard, if only because one card denied Soverel the outright win.

In the pot that decided the tournament, over 98% of the chips were in the middle pre-flop, Paul Newey holding pocket nines and Sam Soverel with pocket jacks. A nine appeared on the turn to deny Soverel the victory and 60 points, which, although at this stage aren’t enough to keep him from the top of the leaderboard, with 10 more events to come at the Aspers Casino in Stratford, East London, they could yet be vital to whoever end up lifting the glass trophy aloft.