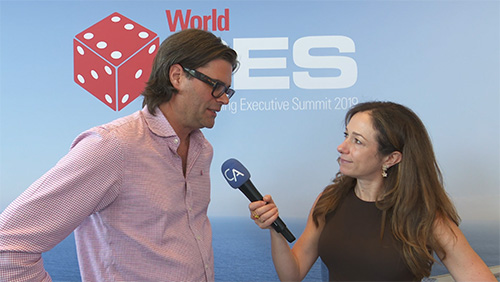 The online gambling industry has been looking for a way to target millennial audiences, trying new products and advertising techniques to draw them in. What Casinofair has been discovering is that by turning to blockchain games, they might have figured out part of what younger gamblers want. Lloyd Purser, Managing Director of Casinofair, joined our Becky Liggero to explain the trends.

The blockchain revolution is quickly coming to online gambling, and Casinofair is one brand that is very much embracing that change. “So we have a casino platform, Funfair’s casino platform, Casinofair’s the brand, its operated within the Funfair group of companies, and it really is for us, it’s about driving B2C products, getting customers adopted into the blockchain, and really driving that as hard as we can,” Purser explained. “Now, in terms of doing that, we’ve got very active communities. We have products improvements that are coming as well. We have a revolutionary affiliate program on the way, which is an onchain affiliate program where affiliates can earn money in real time, effectively, the execution of the games session, affiliates get paid.”

As a result of their embrace of blockchain technology, Casinofair is quickly seeing a younger audience of millennials using their service, and they are trying to understand what that audience wants. “There’s lots of things within what we’re doing which are really attracting that audience,” he said. “And we’re looking at our games, we’re looking at our promotions, now we’re starting to learn about this audience. How do we change what we’re doing to really give them what they want?”

One thing they’ve discovered quickly is a demographic advantage by focusing on blockchain games. “We got some data, some network data, and it was very interesting to see how we compared to it,” he said. “And we’re much younger, we’re much younger than a traditional online casino. 85% of all of our wagering activities is millennials or younger, and we’re probably almost split 50/50 from the age of 27 down up to 37. So, we’re very strong on the younger segment, we know that that’s been a problem area for casinos in the past.”

As it turns out, younger players, wanting a more transparent system, are naturally attracted to the advantages that blockchain presents. “We know that millennials, and younger millennials specifically, there’s elements of the blockchain which resonate really well with them: Provable fairness, speed of instant winnings, not putting your custody of your money, giving the casino custody of your money,” Purser told Liggero. “So it’s very interesting. And there’s lots of other things that they do that traditional players don’t seem to do so much. They’re social, they chat within communities. They like leaderboards and they like competitions. They’re competitive as well, they compete against each other. It’s very interesting, it’s great. I’m happy that the data backed up what we thought and what we wanted, which is we can reach a new audience through the blockchain.”