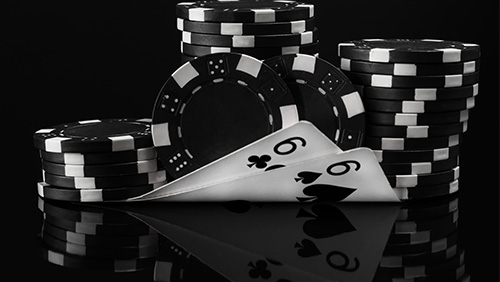 The final event of Triton Million London, £50,000 No-Limit Hold’em Short-Deck, has reached the end of Day 1 with Malaysians occupying the top spots.

One thing you quickly learn on the Triton tour is how chilled everyone is. Tournaments rarely start with a bang, with fields steadily growing through the day, as players enter at a pace that suits.

Event #8: £50,000 No-Limit Hold’em Short-Deck is a prime example. Only five players were punctual, and the quintet competed for several levels before the crowd began to swell.

By the time the Tournament Director, Lucas Vivaldi, signalled time for forty-winks, 17-players had entered, racking up 14- re-entries, and suddenly we had a game on our hands.

Registration remains open until approx. 3-3.30 pm, giving the people who spill out of the £100k Short-Deck Main Event Final Table, and any other stragglers, a few more hours to swell the coffers.

In the meantime, let’s take a look at the biggest hitters in the Top 10.

Kok Weng Beh is the chip leader with 1.1m in chips. Beh played in the £25k No-Limit Hold’em Turbo, and the £100k No-Limit Hold’em Main Event without cashing, and he only cashed once in seven attempts during his recent trip to Montenegro.

Beh isn’t the only player who needs this one to climb out of his hole. Twice Triton Champion, Ivan Leow, sits in second. Leow has earned HKD 38,241,818 competing in Triton events, but so far, Leow has failed to land in the money in London, and he’s played in the lot.

A quartet of stars from the West occupy spots in the Top 10.

Three-time Triton Champion, Mikita Badziakouski, sits in fourth. Badziakouski was one of the punctual five, and with good reason. The man who lights up Triton events like a kid’s torch in a tent has failed to make money in any of his six starts in London.

Daniel Dvoress had an outstanding time in Montenegro, making five final tables, and winning heaps of cash. But he didn’t win a title. This is his sixth event in London, and so far he has made money only in the £50,000 8-Handed No-Limit Hold’em finishing eighth.

Ben Lamb became a Triton champion in Montenegro winning the HKD 500k Short-Deck event. This is Lamb’s sixth event in London, and he’s cashed once, finishing in 12th place in the £25k No-Limit Hold’em Six-Max Turbo.

Rounding off the top ten is Triton Ambassador, Jason Koon.

Koon leads the Triton All-Time money list earning more than the GDP of a small country, and equals the record of three Triton titles with Badziakouski. Koon has appeared in seven tournaments thus far, cashing three times, including finishing runner-up to Charlie Carrel in the £50,000 8-Handed No-Limit Hold’em for £907,000.

It’s the final day of Triton tournaments in the Hilton on Park Lane, meaning this one will end with a winner.

Here are the chip counts in full.