Home / Casino / Man arrested after stealing $625,000 from casinos on The Strip 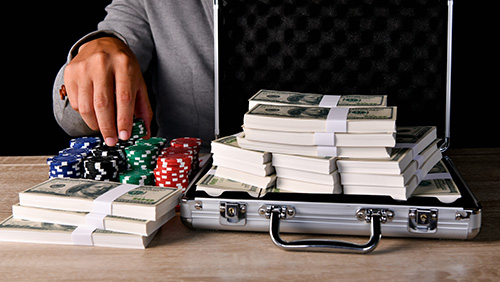 A 46-year-old gambler is going to have to answer to a judge for his theft from several casinos on the Las Vegas Strip. Sang Lee didn’t rush the casinos with guns blazing in order to rip them off or threaten to detonate a bomb if he wasn’t paid. Instead, he took advantage of markers to continue his activity, racking up more and more debt he knew he could never pay and then trying to hide from the casinos when they went after him.

According to the Las Vegas Review-Journal, Lee was able to secure eight markers from different casinos between 2016 and 2017 in order to feed his thirst for gambling. Those eight amounted to $625,000 and, Sang never made good on them. The Venetian received checks amounting to $300,000, the Palazzo was presented with $25,000 in rubber checks and three checks totaling $300,000 were handed to cashiers at Wynn Las Vegas. After waiting the set amount of time for the markers to be paid off and not hearing from the gambler, the venues then attempted to collect the debt, only to find the checks bouncing like an NBA basketball.

It took a while, but law enforcement finally caught up with Lee this week. He has been released on his own recognizance while he waits to appear before a judge. That day will be October 7, but Lee probably doesn’t need to be too concerned. Others before him have skipped out on their markers and casino debt and, at least as far as the law is concerned, typically only walk away with a slap on the wrist.

Andrew Pham was able to accumulate $1 million in gambling debts in 2011 in seven Vegas venues before his streak came to an end. When he stood before a judge, he held his head in shame and said he was sorry. He was given probation and ordered to repay the debt, but the casinos have said that they have never received any restitution.

There are millions of dollars handed out like jelly beans in casinos each year that don’t require any sort of real verification that funds are behind the credit. If casinos want to improve their bottom lines, they should probably consider ways to improve the ways they issue markers and other forms of advances.