Home / Sports / Presidential olympics: Odds on if Biden could beat Trump at pushups 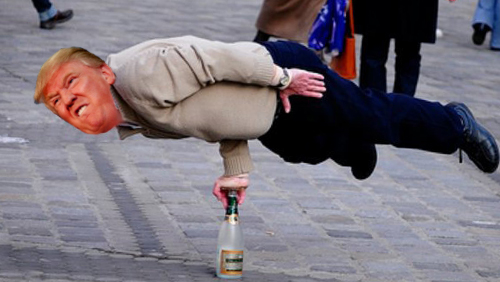 If there’s anything that proves a person is capable of governing the largest economy in the world, and navigating the complex political problems of the 21st century, it’s a push-up contest. That’s the implication Democratic primary candidate Joe Biden made when MSNBC’s Mika Brzezinski asked him what he would do if President Donald Trump made fun of his age.

So, because the world is a garbage fire and the U.S. has a TV reality star as its commander-in-chief, you know these two are going to end up in a physical competition, a la the 1970’s ABC hit, Battle of the Network Stars. As this is a sure bet to happen, Bovada has provided odds for each potential combine event.

In the first event, the two septuagenarians will see who can bench 225 pounds for the most repetitions. Trump is favored (-150), but don’t count Biden (+110) out. He’s got a wiry strength built from years of hugging everyone he’s come across.

The second event is a matter of speed, as the two will try a 40-yard dash. This one is almost even odds, but Trump (-135) is still favored over the former vice president (-105). I think you have to pick Trump here, who I’m sure decided on the color red for his MAGA hats because “red ones go faster.” (Editor’s note: We cannot prove Donald Trump has ever said “red ones go faster,” but odds are…)

Next up is the vertical jump, and this one is absolutely at even odds (-120) for each candidate. I expect both candidates to somehow lose this one (resulting in a push). But that’s not a satisfying conclusion, so Mike Pence, stepping in as Trump would be incapacitated, will face-off against, let’s say, Corey Booker. Pence will also lose, because imitating Trump is his most sincere attempt at flattery, but Booker will just annoy the judges to the point of having to forfeit. This will continue endlessly until Kirsten Gillibrand somehow wins, as that woman is ready for this.

Finally, the main event, who can get to 100 pushups first. Finally, Joe Biden is the favorite here (-150), and that makes sense, because Donald Trump (+110) loves fast food and believes exercising is stupid because he believes the human body is like a battery that cannot be recharged. Elections might not be decided on pushups and physical competitions, but if they were, Donald would be done for.