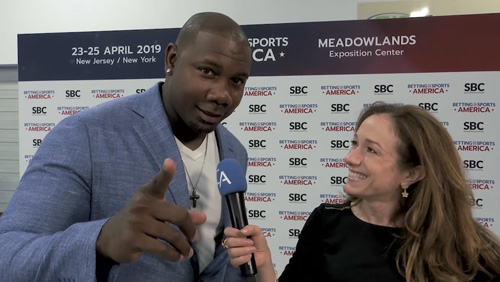 They say that there’s nothing harder in sports than hitting a Major League fastball, but Ryan Howard did it really well for 13 seasons, winning a World Series along the way in 2008. Now that he’s retired, he’s joined the Athlete Venture Group of SeventySix Capital, a venture firm that invests in sports gambling start-ups and supports former athletes and military service members to start their own businesses in the field. He joined CalvinAyre.com’s Becky Liggero to talk about it.

SeventySix Capital isn’t limiting itself to any one aspect of the industry, Howard explained, as it’s ready to jump on any opportunity that presents itself. “So we actually have gotten in on a few different facets of it, and that’s kind of the thing of it, as I call it the wild, Wild West, it’s all about finding the right space, the right niche” he said. “We’ve gotten in on it on the data collection, the data analytics as well as the broadcasting side of things with our play by play sports broadcasting camps, because that’s also going to kind of change the future of broadcasting as well.”

Baseball has had a difficult history with gambling, but Howard sees a bright future for it in America. “Betting has been something that’s been here, been a part of America’s culture forever,” Howard said. “I kind of look at it as like the wild, Wild West. But now, a bunch of states have the opportunity to be able to legalize and bring it out there, I think it’s just going to open up more vast opportunities for companies like ours at SeventySix to be able to explore different ways of getting into that world.”

Just like the opportunities that come to his new career, Howard explained that you couldn’t force slugging home runs; you had to wait for the right pitch. “The secret to hitting home runs everybody, are you ready?” he asked. “Don’t try to hit home runs. Home runs are accidents. It’s just a combination of everything just kind of coming together. To me, it was just never really trying to hit a home run, it was just about getting at the right place at the right time and letting the pitcher provide all the power.”

It wasn’t always easy though, and Howard had several pitchers that could tie him up. “[Max] Scherzer was tough,” he recalled. “For whatever reason, I think it was guys named Oliver. I struggled against Oliver Perez, but yet also Darren Oliver. I think I was like 0-6 with 6 strikeouts or something like that against Darren Oliver. And it wasn’t that he was going to overpower you. He just threw me this cutter and I was just baffled as to why I was not hitting the ball, so it might be something with somebody named Oliver, who knows.”