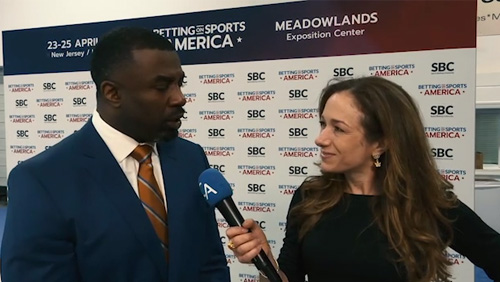 As an elite running back for the Philadelphia Eagles, Brian Westbrook was a multi-threat player, able to run the ball for 100 yards a game or lead the team in receptions, doing whatever it took to get the job done. Now as a member of the Athlete Venture Group of SeventySix Capital, Westbrook told CalvinAyre.com’s Becky Liggero that he’s doing whatever it takes to help startups in the gambling industry.

Westbrook explained to Liggero what his purpose was at the Betting on Sports America (BOSA) conference. “This whole conference is our world,” he said. “This is what we’re talking about, this is what we’re investing in. A big part of our platform is figuring out what’s going on in analytical world of sports, and that technology, and invest in it, and make sure some of these startup companies have an opportunity, and so that’s why we’re here.”

Being a former NFL player, Liggero asked him his thoughts on the NFL’s journey with gambling. “The NFL for a long time was anti-gambling,” he agreed with Liggero. “They wanted to protect the integrity of the game. They don’t want the guys betting on the game, which I still think is accurate.”

But that simply can’t continue, and Westbrook doesn’t believe it will. “They also have to acknowledge that the world is gambling,” he explained. “They’re betting on the game, there are a lot of different prop bets. A lot of the revenue, TV revenue, comes from guys that are gambling. Guys, people, women, men that are gambling, and take advantage of that. I think as the NFL, as time continues to progress, they’ll have to accept it, and they’ll have to build that platform inside of what they’re doing as well.”

His involvement with the venture firm looks to capitalize on that movement. “For us at SeventySix, I think we’re at the forefront of it, and we’re trying to figure out how to find these startup companies that can make it easier for the consumer to gamble and be attached to the analytics of the game as well,” Westbrook told Liggero.

While SeventySix capital is looking to help any startup in the sports world with a good idea, Westbrook’s Athlete Venture Group, which also features MLB All-Star Ryan Howard and fellow Pro-Bowler DeMarco Murray, is helping former athletes and U.S. service members to get started in the industry. “I look at the NFL and our service members, some of them, you know, you work hard for a very long time, you certainly get rewarded, and we at the NFL and athletes, we probably are better rewarded than some of our soldiers,” he said. “But when they leave the military, they have a history of dedication, of sacrifice, of hard work, and they understand the process of success. You need all three of those things to be successful. And football players, athletes in general, and our service members, have all of those attributes. And I think, either one, you can’t go wrong with those types of people that want to work and be a part of your entrepreneurial efforts.”