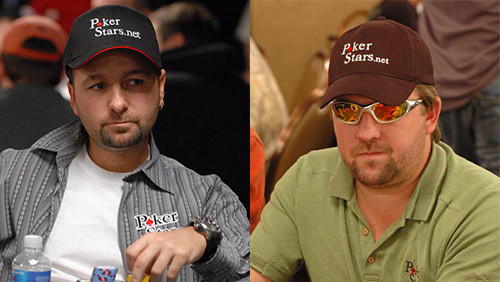 Daniel Negreanu and Chris Moneymaker were the stars of the show as the World Series of Poker honoured the best in the business during a special First Fifty Honours celebration over the weekend.

There is a horrible and barbaric act that happens in Asia, where people chain macaques beneath a table with its skull protruding through a hole in the table top.

One of the men, sitting around the table, uses a scalpel to open up the monkey’s skull, and as it thrashes below, wildly, the men take turns eating the brains with garlic or dipped in alcohol.

These crazy people believe that the practice cures impotence, and the more manic the macaque’s struggle, the stronger the cure will be.

Daniel Negreanu won’t be ordering a macaque monkey anytime soon. It doesn’t matter what decade we’re in, who the president is, who tops the Billboard 100, or wins the Royal Rumble, ‘Kid Poker’ never fails to perform.

On Saturday night, the World Series of Poker (WSOP) held a special gala in celebration of 50-years in the business, and Negreanu stole the show. The head of this particular sunflower was the awarding of six titles honouring the most remembered players of the past 50-years, and one with an eye on the future.

The general public voted for the winners, and Negreanu featured in three of the seven awards.

The Canadian won the ‘Best Overall WSOP Performance: (Single Year)’ award for his performance across the 2013 WSOP. It was an unprecedented year for the WSOP, hosting events in three continents (WSOP-APAC in Australia, WSOPE in France, and WSOP in America).

Negreanu only cashed in six events at the WSOP in Las Vegas, making only one final table (finishing runner-up to Eli Elezra in a $2,500 2-7 Lowball Triple Draw event), but he became only the second player in history to win two WSOP Main Events on different continents by winning the WSOP-APAC Main Event, and became the only player to win two WSOP Player of the Year awards when he won the €25,000 High Roller at WSOPE.

Negreanu also won the ‘Fan Favourite’ award and was named as one of the ‘Four Most Important Players in WSOP History,’ with six bracelets, 121 cashes and $17.4m in cashes.

Another man recognised by the public as a centrifugal part of the WSOP was Chris Moneymaker.

The man responsible for the ‘Moneymaker Online Poker Boom,’ won the award for ‘Most Memorable TV Hand,’ (his bluff against Sammy Farha in the 2013 WSOP Main Event – see below), ‘Most Impressive WSOP Main Event Win,’ for his 2013 victory, and the general public also named him as one of the ‘Four Most Important Players in WSOP History.’

There can’t be a WSOP awards ceremony without Phil Hellmuth Jr., and the WSOP bracelet record holder (15), won the award for ‘Favourite Bad Boy,’ and was one of the ‘Four Most Important Players in WSOP History.’

The Godfather of Poker, Doyle Brunson closed out the quartet of the ‘Four Most Important Players in WSOP History,’ with his 10-bracelets, back-to-back Main Event wins, 37-cashes, and $4.6m in money earned. And there was an award for Justin Bonomo, the man who eclipsed Negreanu at the head of the All-Time Money List with $44.8m in earnings, after a 2018 that saw him earn $25.4m. Bonomo picked up the award for ‘Most Likely to Succeed (Most Bracelets 2020-2070).’ Bonomo has won three bracelets, made 54 cashes, and has come close to adding to that bracelet haul on numerous occasions.

We cannot confirm the rumours that Negreanu is preparing a secret Macaque like table for Bonomo for pinching his number one spot in that All-Time Money List but believe there is a high probability of truth in them.