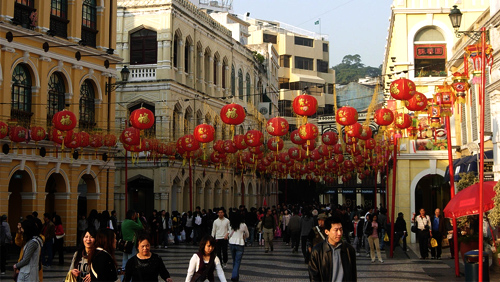 Regardless of how the casino industry is doing, the Macau tourism industry is doing better than ever. According to the most recent numbers from Macau’s Statistics and Census Service, the number of visitors in May increased 25.6% year over year.

The increase in visitors came from both overnight and same-day visits, but the healthy growth was mostly helped by the latter. While those staying overnight represented 1.6 million total visits, a 10.3% increase, those visiting just for a single day visit jumped to 1.8 million, a 43.3% increase.

The large increase in visitors was credited in part to the fairly new HKZM bridge, which helped ferry in more tourists for the Labour Day holiday period that ran from May 1 to 4 this year. In total, the amount of people visiting by land increased by 64.2% to 2.5 million total. That far outweighed the decrease in those arriving by sea, which was down 40% for the month.

The increase in the number of visitors, with more coming for same-day visits, also resulted in a shorter overall stay, with the average length of visit decreasing to 1.2 days per tourist, a drop of 0.1 days.

Once again, the HKZM bridge helped Macau have more visitors from Mainland China specifically. 2.43 million of them came to Macau for the month, a 30.4% increase when compared to 2018. That far outweighed any other country, with South Korea’s 65,000, Hong Kong’s 580,000 and Taiwan’s 87,000 trailing far behind.

With consumer confidence high, the Guangdong province made up the largest share of visitors from China, with over 1 million coming from that province alone.

As more tourists crowd into the city, Macau is still figuring out how it can handle so many people. A tourist tax has recently been proposed, but not everyone is a fan.

Regardless of its increased tourism, Macau’s gross gaming revenue (GGR) is still struggling. Although plenty more people are coming into the city, they can’t make up for the VIP revenue that it has lost to the U.S.-China trade war.