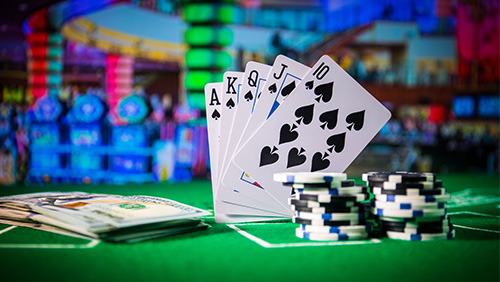 News from the live tournament circuit including a massive Mid-Season Championship for the Mid-States Poker Tour, the belated climax of 888Live Barcelona, and news of the next poker sesh for tournament folk at the Borgata.

Mazen Abdallah has taken down an enormously popular Mid-States Poker Tour (MSPT) $1,100 Mid-Season Championship at the Venetian in Las Vegas after agreeing upon a four-handed deal.

What’s Abdallah going to do with his newfound wealth?

He’s more likely to use the funds to rescue a beached dolphin rather than buy one after he told the press that his wife refuses to allow him to keep any money he wins playing poker.

“It’s either going to charity or people who are in need.” Said Abdallah.

It’s only the champion’s seventh cash, but he did win the 21-entrant $3,250 No-Limit Hold’em High Roller at the World Series of Poker Circuit (WSOPC) at the Hard Rock Hotel in Tulsa a few weeks shy of the start of the World Series. Abdallah earned $31,500 for that win, his personal best until this massive score.

The 888Live Barcelona Main Event slipped through the fissures of the concrete paving stones of my mind, sorry about that one – I’ve had a crow pecking my eyes out these past few weeks, and I’ve been feeling more Bushwhackers than Hart Foundation.

Better late than never, ever.

Rossi had only cashed in five live events before his win, with €6,500 ranking as his highest finish, and it was an inexperienced final table all round except Stefano Schiano who won the European Poker Tour (EPT) French National Championships in Monte Carlo earlier this year.

Three other birds that were more crow than kiwi in this thing were the fourth-place finisher in the $25,000 High Roller at the PokerStars Caribbean Adventure (PCA) in January, Tom-Aksel Bedell (10th), the former World Champ, Martin Jacobson (12th) and the former November Niner, Fernando Pons (13th).

Details of the other results are like shrapnel, but we do know that Kara Scott won the Ladies Event for her first ITM finish since 2017, and her first tournament appearance since taking a break to have a baby.

Online satellites begin on BorgataPoker.com June 23 and run till July 21.

The Borgata is hoping the Summer Poker Open is as successful as its Spring brethren after the festival paid out $4.5m across 21 tournaments, with 19 events surpassing guarantee. David Jackson won the 505-entrant, $2,700 buy-in, $1m GTD No-Limit Hold’em Championship for $304,929, beating Shannon Shorr, heads-up.