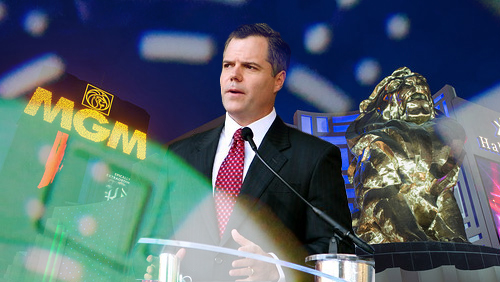 The leadership of Osaka have had a dream: They want to win an integrated resort (IR) license and have one built by 2025. Analysts have looked at dream and scoffed, telling them they were being unreasonable, and to work on a more sensible plan. But what kind of monster would step on a Japanese city’s dreams? Godzilla? He’s not real!

Proving that Osaka’s leadership might have been the bold but practical leaders they always claimed to be, Jim Murren, CEO of MGM International, conceded that a 2025 opening for an Osaka IR is indeed possible, if all parties involved, private sector and local government, work with “almost surgical precision,” GGRAsia reports. He made the comments at the Strategic Decisions Conference hosted by brokerage firm Sanford C. Bernstein.

His concern is that Osaka might sabotage their own attempt at a speedy IR by being too bullish on the prospect. Considering Japan has been very conservative in the IR process so far, their push to build a casino as soon as possible could be off-putting and doomed.

All the same, Murren couldn’t be more excited about the prospect of an MGM resort in the Osaka area. “Osaka was the only city, the only prefecture that early on said ‘we absolutely want to host an IR bid’,” he said.

MGM is likely to be one of the seven operators that Osaka mayor Ichiro Matsui recently teased had submitted concepts for their future resorts. Murren’s talk of potentially building a casino in time for 2025 might be a smart play to win over local politicians and win the license for his operator.

If MGM does win the license, Murren shared that he feels it’s the most exciting prospect for a casino operator today:

“I can’t think of an opportunity in the world today with as potentially high a return on investment: even given everything we know – construction costs; regulations; taxes; gaming restrictions; entry fees… it is an extraordinary opportunity.”

That sweet talking is preaching to the choir when it comes to Osaka politicians, but it could be the edge MGM needs to get that license. With seven potential winners, even the smallest difference could mean billions of revenue down the road.