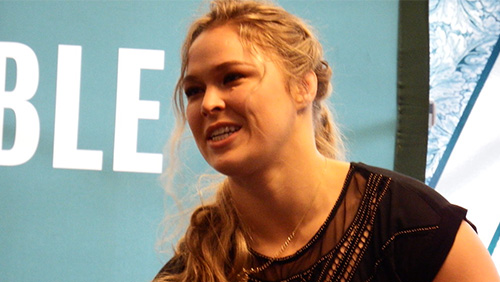 Not all that long ago, UFC president Dana White didn’t believe in having women fight in his organization. However, the sensation that was Ronda Rousey changed all that.

Rousey has long since retired from the sport and now women headline UFC cards once in a while. That is the case this Saturday night from Brazil when Rose Namajunas puts her strawweight title on the line against top challenger Jessica Andrade. Not often a champion is a betting underdog but Namajunas is even-money and Andrade is at -130 odds.

If it seems like the UFC is in Brazil often, that’s because it’s true. That country is perhaps more MMA-crazy than even the United States and many legends of the sport are from Brazil. The 27-year-old Andrade (19-6) is from the country. She began her career at bantamweight but is 6-1 since moving to strawweight. That loss was to former champion Joanna Jedrzejczyk in a title fight at UFC 211. Andrade has won three in a row since, finishing off Karolina Kowalkiewicz last time out at UFC 228 by first-round knockout with one devastating punch.

Namajunas (8-3), a 26-year-old American, has a loss to Kowalkiewicz on her resume, coming by split decision at UFC 201. Namajunas has won three in a row since. She claimed the strawweight title with a first-round TKO of Jedrzejczyk at UFC 217 and then won the rematch at UFC 223 last April. Namajunas hasn’t fought since because of some neck problems.

When the UFC heads to other countries it likes to stack the card with fighters from said country. And the greatest Brazilian MMA fighter of all-time and among the best ever is Anderson Silva. He’s a +110 underdog for his middleweight bout against Jared Cannonier (-140).

Silva (34-9), the long-time middleweight champion, is definitely in the twilight of his Hall of Fame career at age 44. That he’s ranked 15th in the division is likely because of his name only as Silva has just one win in his past seven fights. He lost in February to rising middleweight star Israel Adesanya by unanimous decision.

Cannonier (11-4) is ranked 10th in the division and a former light heavyweight. The 35-year-old stopped a two-fight losing streak with a second-round TKO (punches) of David Branch last November. Silva will be easily the biggest name Cannonier has faced.