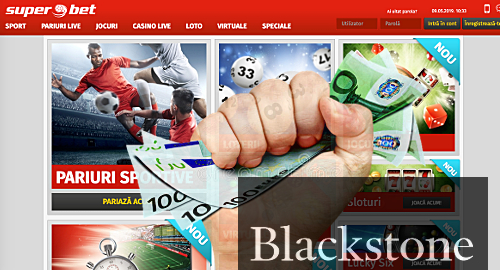 On Wednesday, the US-based Blackstone Group private equity firm announced that its Blackstone Tactical Opportunities subsidiary had made a €175m investment in Romania’s SuperBet. Blackstone senior managing director Andrea Valeri said her group was keen to support the gambling operator’s “upward trend,” which is based on “international expansion and continued technology investments.”

SuperBet CEO Sacha Dragic duly logrolled back, saying Blackstone was a “capable” partner to support his company’s market-leading position in Romania. Dragic added that Blackstone’s cash will also help Superbet capitalize on expansion opportunities in both Central & Eastern Europe and around the globe.

SuperBet began life as a land-based betting operator in Romania, and currently operates over 1,200 points of sale throughout the country. SuperBet launched a Romanian online betting site in 2016 and has since established land-based operations in Poland, although its Polish-licensed online presence has yet to launch. The company boasted turnover of €180m last year.

Blackstone has become increasingly focused on the gaming industry in recent years, including last year’s acquisition of Spanish gaming giant Cirsa’s operations in Spain, Italy and Latin America. Blackstone has also been mentioned as a potential suitor of Mexico’s PlayCity land-based and online gambling operations.

In 2017, Blackstone took stakes in the PaySafe Group and Clarion Events. In March of this year, Blackstone announced plans to acquire Murka Entertainment, a Ukrainian developer of social and mobile games, including numerous social casino slots titles.

Blackstone acquired the struggling Cosmopolitan hotel and casino in Las Vegas in 2014, but reports emerged last month that the hedge funders were looking to sell the property, the fortunes of which have turned out dramatically over the past five years following Blackstone’s $500m upgrade. The likes of Wynn Resorts, MGM Resorts and Genting have been bandied about as possible purchasers of the property.