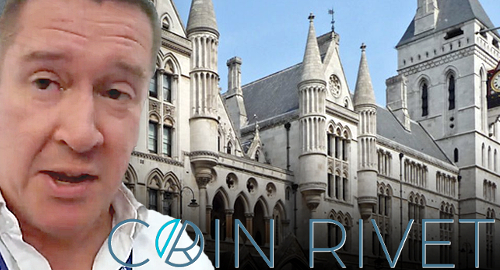 Karamat admitted that, contrary to information published via Coin Rivet, none of the women in Ayre’s social media posts were ‘pre-teen’ or under the age of consent. Karamat further admitted that Ayre had not been referred for investigation by authorities or child abuse charities and there were no grounds to suspect him of child abuse.

Coin Rivet previously agreed to publicly apologize to Ayre via their website and to pay him £5,000 in damages. As a condition of the settlement, Parkin (pictured) appeared in court to acknowledge the falsity of the site’s claims, to repeat their apology to Ayre and to confirm that they wouldn’t repeat these allegations in future.

Ayre was justifiably outraged by Coin Rivet’s allegations but his primary concern throughout this process has been for the five Cuban women featured in his social media posts, who lacked the financial means to pursue justice on their own.

Prior to the settlement, Ayre had publicly announced that he would forward all monetary damages paid by Coin Rivet to the five women, for whom such sums represent a significant boost to their annual income. But the money may prove cold comfort for at least one of the women, who has paid the highest price of anyone involved in this debacle.

This woman, a 21-year-old named Elianna, was called in for questioning by local authorities, who apparently felt the publicity reflected negatively on Cuba. The women were hired to stage a dance performance for Ayre’s cameras, but coverage by Coin Rivet’s Helen Bennicke – who called Cuba “a well-known destination for sex tourism” and said Ayre had “effectively ‘bought’ [the women’s] company” – left the impression that something infinitely more salacious was at play.

Unlike the other women, who were all from Havana, Elianna is from the town of Las Tunas, and the Havana police evidently decided to make an example of her. Regrettably, CalvinAyre.com has learned that Elianna has been sentenced to two years in prison. The authorities apparently charged her using the pretext of violating Decree 217, a 1997 law restricting Cuban citizens’ ability to travel to Havana without permission.

Ayre maintains that the majority of the abuse he was subjected to via crypto blogs and social media trolls had little to do with outrage over perceived sexual impropriety and everything to do with the desire to tarnish his name and, by extension, the Bitcoin Satoshi Vision (BSV) protocol he has so publicly endorsed.

The crypto sector is still in its infancy, as is the mindset displayed by many of its most ardent supporters. Until it evolves out of this juvenile state, with an ‘ends justify the means’ approach toward attacking supporters of rival technologies, crypto will remain on the fringes of the ‘traditional’ financial sector.

For anyone who wishes a grown-up discussion on all things crypto, travel to Toronto on May 29-30 for the next CoinGeek Conference. Ayre will be there advocating on behalf of BSV. Bring your ‘A’ game and challenge him with your own views on the sector and see whose argument wins the day. Just leave the mud at home. ​